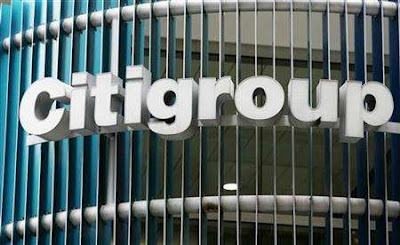 To "conviction buy" and sees accelerating revenue growth and touts a 560 target. The stock is up $15 on the news, and because of a rather strange Kabbalist tout!

Nice to get a GOOG upgrade during option expiration week! GOOG's paid clicks, however are up 2% from June.

But maybe you folks don't like getting the upgrade on GOOG before Goldman gives it out to their clients. I touted GOOG last night, and then Goldman put it out on their conviction buy list today.

Google price target raised to $486 from $414 at Goldman
Goldman said paid leads are growing faster in emerging markets than in the U.S. and Europe, although price per a click is lower. The firm has raised lead growth estimates by 5% per year over 2010-2013. Shares are Buy rated

Hey just because Goldman reads this blog, it doesn't mean they get any ideas from it! (I'm just f*ckin' with Goldman--don't take that seriously even though it's true.)

In other Goldman news, they have been massive buyers of Citigroup, another stock that I have been touting, while the street is still skeptical of the stock.

Maybe Goldman has some kabbalists working in their basement!

I've touted it about four times the last two weeks, and I'll tout it again.

C is going to 7, as a first stop, and it will do it much faster than Wall Street thinks.

And if C is at 7 before year end, where do you think the rest of the financials will be, that the bears are still laying out shorts on?

But Bank of America has more going for it than Citigroup, the other government-bailout heavyweight. Bank of America, for example, never suffered from the sclerotic sprawl that afflicted Citi, leaving the New York megabank struggling to hit earnings estimates.

The question is, how much is Bank of America worth? Its stock has jumped almost sevenfold since its low in February. Mr. Paulson has already made at least a 22 percent return on his investment, and would have raked in 150 percent had he bought all the shares at the start of April. But Bank of America’s stock now trades at just 75 percent of book value....

But 1.5 times book value sounds reasonable for a postcrisis Bank of America, meaning its stock could rise by another half.

So now the NY Times says BAC is a buy! Isn't that special! Where were they before?

So why would the NY Times, then get Citigroup right? They won't! Because if BAC is worth 24, then what is C worth?

Journalists only report what others mainly tell them, and the big money, is only now getting long Citigroup. The big money, as already gotten long BAC. Now they just need to ride the wave.

The easiest play in the world, to make money on C, is by trading the cheap options on this number.

Everyday you can print money on this stock, and it isn't even difficult.

But I'll advertise this again, until Wall Street gets long!

Sorry the hedge funds stepped in again! Thanks for the action!

but i assume since your target is 7 even with the hedge guys coming in it's still a good buy? sorry...i'm a rookie.

where do you see HBAN going to? it's been the slowest of the regionals.

It has been slow..It's reader for a Cramer pump!

Did Goldman say they were buying C or you just have a hunch?

I'm trying to get in the options, but my cash has to 'settle' after my last trade. God that's annoying hah.

Damn that isn't monopoly money either! You think the Jan 2010 5calls is a good play?

I'm sure down the road Goldman will come out with an upgrade on C... :)

after they get a big enough position--after all isn't that how Wall Street works????

It's just an inside game, that they want no light shined on!!!

Do you follow the WLI at businesscycle.com? The freebie, which is one week delayed, shows the forward growth rate soaring.

1) Is Citi going to have a reverse split? If yes, how will it affect the stock price?

2) I'm new to options play. What is your best bet for Citi? I was thinking maybe CAX.X to play it safe?

Let's assume it goes to 7 by January.

I think you are better with the 5's

Look at AIG since it had a reverse split

don't get me started on cheap options plays

that's where i find all the action!!

was already on this blog