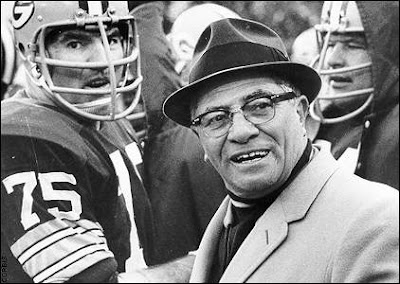 Where is the pain?

It's football season, and the coach that I've always liked the best was Vince Lombardi. He understood pain. You get hit in football, and you feel pain. It's not the mental pain of work, or the "pain" that the market extracts for a trade gone bad, but bone crushing pain. Vomit pain. Dizzying pain. Queasy pain. Fear pain. Throbbing pain. Headache pain. Numb pain. Scared pain.

But it was pain, nevertheless that had to be conquered.

So where's the pain with the bears?

Are they out on the streets like the old lady that owned Lehman preferreds or Fannie paper? Or WaMu common, or a Wachovia stub, or piece of Bear? Or a shareholder of GM? How much pain did the bears inflict on them? Pain, that they accelerated, like a cheap Jack Tatum hit?

Where is the payback for that?

All I know is that these bears still haven't felt pain. The front page of the WSJ has a few shills telling us the market is now overpriced, because they were bullish in February or March, even though they said to sell at 880 or 940:

Now, the chairman of Boston asset-management firm GMO and his colleagues say the S&P 500 has zoomed right past what they consider fair value of about 880, based on earnings estimates and historical price-to-earnings ratios.

Mr. Grantham sees "seven lean years" of a sluggish market ahead, to atone for what the firm believes was a long era of overpriced stocks, according to his newsletter.

Seven lean years? What does he think---he's Joseph? Has he been interpreting the Pharaoh's dreams? So what's with the talk about the coming seven lean years? Does he have a chart that goes back 3500 years?

And wasn't Joseph's first born named Manasseh--because he "hath made me forget all my toil. (Genesis 42:41) There are always two sides to every story, and every anecdote!

You also had businessinsider.com coming up with more charts, "proving" we are still in a long term secular bear market.

Why all this nonsense? Because they're still dealing with the pain that the bear market extracted!

And they haven't built up enough profits to be numbed by the previous bear market losses!

Lombardi said, "Fatigue makes cowards of us all."

And since the bears aren't cowardly, it means they have to be hit with more pain.

Until their heart isn't in the game.

Because Lombardi also said this: "Every time a football player goes to play his trade he's got to play from the ground up — from the soles of his feet right up to his head. Every inch of him has to play. Some guys play with their heads. That's O.K. You've got to be smart to be number one in any business. But more importantly, you've got to play with your heart, with every fiber of your body. If you're lucky enough to find a guy with a lot of head and a lot of heart, he's never going to come off the field second."
Posted by Palmoni at 8:38 PM

I love your posts and have read and re-read most of them. Are there any books you would recommend I read, I am a newbie to investing and want to learn as much as I can? Also what the most important things to look for when buying a stock?
Sorry to be so broad and thanks in advance

I might be biased but you're starting in the right place! lol

No with all seriousness--Warren Buffett said that if you're new to investing just read whatever you can get your hands on--especially what interests you.

but the most difficult aspect is applying that knowledge to the stock market.

Then you have to assume that those trading the stocks you like, probably know more about it than you--or their opinion matters more. Not because they are smarter than you, but because they manage billions of dollars, and thus their influence is greater than you.

they of course, think they are smarter than you because they manage billions-- use that to your advantage!

Look at how many of these people that manage billions perform so poorly, or can't keep up with the market averages!

Do you think they spend their nights pouring over research or doing homework?

The market is a meritocracy. If you study it, you'll do well!

But there is nothing like buying and selling stock for yourself that will sharpen your skills.

Thmore you trade, the better your pulse on the market is.

On stocks, I tend to stick to the bigger companies, and the bigger names, because you can find out that information easily--and they are easier to trade.

I also don't like companies with debt, except in marking turning points--Then the leveraged companies out-perform just about everything else.

And if I want to speculate on those numbers, I'll use options to leverage myself.

Too many people go all in in one stock that they like, and sometimes it's a speculative name. You can live in a trailer park, and talk to you neighbor about your 9 big winners on the market, but that you lost it all on the 10th.

I like books about Buffett, history books on the growth of companies, and old-fashioned value investing--so I don't have a name that I could give--but I pour through the SEC filings on a company, read what the analysts say, watch how the stock trades, and then, place my bets on it--after I have come to my own conclusion.

I think there is more of an "art" to picking stocks--because I hang out with a lot of smart people, and I can pretty much tell where a stock is going a whole lot better than these folk--even though they are very learned in different fields.

And I think that's because I understand the "Beauty contest" approach to the market. If they like blondes, why go for brunettes?

If a sector is doing well, look to stocks in that sector.

Management of companies are over-rated. Find a company that doesn't need good management!

Also look to trade stocks that look "good" on the charts. A chart is just a history book of the stock action and the interplay of buyers and sellers

Sorry to be so broad!

Hey when you look at a chart, what exactly do you look for? I know charts doesn't explain everything, but being able to spot "smart" money interest should be helpful!

Oh yeah about the market pain, didn't a guy jump out of his office window when Lehman went under? I would call that pain!

I love it. Another Lombardi quote I'm sure you've heard:

This chart prognostication was published publicly on 4/15/2009.

Talk about calling the kettle black!

Thanks for your response. Thats very helpful.