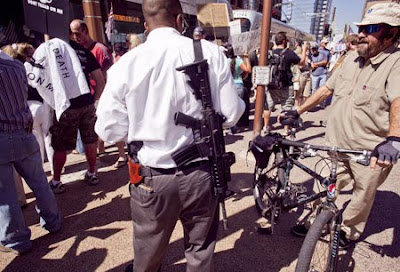 Arizona is an open-carry state, so when Obama gave his speech on health care, you had a dozen folks walking around with their pieces in view--including one guy with an AR-15 semi-automatic rifle.

Better start the stimulus plan for the regular folk instead of just bailing out bankers!

Instead the administration collects names off the emails, critical of his Health Care policies at flag@whitehouse.gov. The White House said, before it closed down the snoop service that, "If you get an email or see something on the web about health insurance reform that seems fishy, send it to flag@whitehouse.gov.”

Doesn't anyone find that just a bit disengenious? Wave the flag, and then snoop on Middle America who doesn't like your health care proposal.

They just got the donor list of the RNC!
Posted by Palmoni at 10:28 AM

The ability for the common man to carry a firearm will keep the elites in place.