Cerberus investors stick it to Feinberg 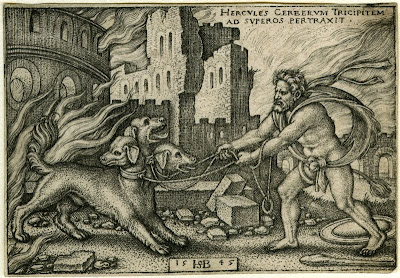 It used to be that Stephen Feinberg pretended he walked on water. Now it's apparent that he can't even skate on ice, as investors have demanded $4 billion back from his funds.

Clients of Cerberus Capital Management's core hedge funds have opted to withdraw the majority of money from the funds, marking a sharp rebuke to the weakened firm and its boss Stephen Feinberg.

Clients owning more than $4 billion of the $7.7 billion in assets in the Cerberus Partners hedge funds have opted to liquidate their holdings, rather than allow Cerberus to collect its typical fees and continue making new investments, say people familiar with the matter.

Why shouldn't they? Plain and simple, the "brains" at Cerberus have made a living f*cking investors and f*cking companies.

Remember when Cerberus backed out of their United Rental purchase? They gave shareholders $100 million and said go f*ck yourself. Read about here.

How about when Cerebus decided to get in sub-prime, and then walked away from their deal with Option One? Didn't Cerebrus tell them to go and f*ck themselves? Read about it here.

How about when the brains behind Cerberus testified in court. Anyone remember that? But first let me take you back a few months before hand. Remember that? When the folks at Cerberus said Steve's brain was the equivalent of two brains of mortal men, taken to the 28th power?

So what happened when the brain went to court? He couldn't tell the good people in court what a "specific performance clause" was.

So Feinberg told the court to go and "f*ck yourselves.

Today he got a $4 billion message from some of his investors.

Go and f*ck yourself.

Because Cerberus, the hell hound of hell, is now guarding the river Styx.

And Feinberg's "Grand Illusion" was that he thought he had a pot of gold, in the pension plans his leveraged companies, that he could tap with the rising markets in 2007 to pay the toll to the hellhound to let him sail the river Styx!

And now, another genius, is exposed as just another Wall Street charlatan, that made his money off of the backs of the workers he pretended he was protecting.

Who employs Dan Quayle, as Chairman of Global Investments!
Posted by Palmoni at 1:30 PM