Does anyone on Wall Street tell the truth? 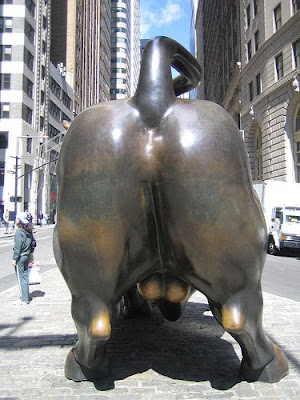 Or is Wall Street just stupid? Can I for once, get just an honest answer to this question? Or do the journalists and reporters and the touts actually believe the stuff they spew?

Let's look at Citigroup. Today we got the Paulson pump, of course chronicled on this blog.Why wouldn't I tout it? I'm long. Is it a sin to defend your position? Oh that's right. I forgot how Wall Street works. Analysts can't have positions in the stocks they pimp and pump or diss and dump! Thank G-d I'm not an analyst! I'm just a tout and a speculator. But I find a tout and a speculator an honorable profession! So let me use at least egregious terminology because I'm not dressed up in a suit, touting my views over a squawk box, pretending my viewpoints are more important than they are. After all, who touts with pictures of cleavage, butt cracks or bible verses?

Which is why I chronicled Cramer's diss of Citigroup two days ago. How is that call even reasonable? How was a .25 cent drop even a reason to sell a stock that you thought was going to 12? Which is why I mentioned that number with Harmon, which Barron's slammed, of which I vehemently argued against. Anyone who bought Harmon at Monday's close is up almost 15% in two days. What is wrong with that? Maybe that's why I touted it.

But the bearish call on Harmon was based on just foolishness. Why? Maybe because those folks had an agenda.

Now Cramer, we know, doesn't have an agenda; Cramer just can't take any pain. So today, on Stop Trading, he touted Citigroup, after he just touted the sell. So you got the pimp and pump, just two days after he gave you the diss and dump! But if you sold at the lows Tuesday, and bought at the close today it cost you at least another 10%.

But did anyone notice what Cramer touted on Stop Trading today besides Citigroup? The Fannie and Freddie preferreds. Now isn't that special. Weren't these numbers just touted here on Thursday night a week ago? The common had moves of 80%. Why else do you think I touted them? And how about the preferreds? They moved nicely also. But how about Cramer's reason for buying them?

Today Cramer touted research done by Bronte Capital on these names. What reasons did I give for touting FNM and FRE? How about this Monday on the comment section:

Well they were touted here Thursday--and FNM FRE and FNA have just about doubled since. http://aaronandmoses.blogspot.com/2009/08/fannie-and-freddie.html But here's a reason with some meat on it. John Hempton, a real sharp guy, at Bronte Capital, put out a 7 part thesis on why the FNM and FRE stubs actually have value. Check it out at his site. http://brontecapital.blogspot.com/

Here is his latest on FNM and FRE

Maybe some people don't want to be able to front run Wall Street research, or maybe, Wall Street is just reading this blog, or maybe, it's because a bit more homework gets done here before stocks get touted, and hard work, last I checked, pays off.

After all, didn't Cramer also tout ATI on his show tonight? Didn't you have these comments this afternoon.

A cheap option play tho is ATI. The BA news may help this number and they'll figure that out tomorrow after all BA is up 4 smackers already!

You get the front runs without the Goldman huddle!

But at least I do homework. Which is something that seems to be missing on the street.

Because did anyone see Charlie Gasparino gasping about AIG today? He said there wasn't any reason for the stock to be up; and that it was just a "short squeeze." Says who? And even if it was a short squeeze, which it isn't just that---why would it end here?

Isn't that just another case of egregious hope by those on Wall Street that are short these names, and they can't take the pain? So get Gasparino to pimp a story, to try and bring these numbers in.

Because the folks on Wall Street are on the wrong side of the bull!

And that my friends, is why Wall Street research is so tainted.

Because they have another agenda.

You can be a bull, as long as they stick it to you in your *ss!

And they make it look like they are being honest in their recommendations because the analyst doesn't own any stock.

But the firm is either long or short millions of dollars of the numbers that they are pimping!

While trying to screw you!
Posted by Palmoni at 8:44 PM

Great post. How are u always right and what's the next stop for the s&p

Awesome post!! This bull obviously still has a pair whereas the bears were castrated long ago.

I think we are seeing a mad dash back into stocks that were left for dead. I’ve read some articles detailing how Cramer would lose his mind when a stock goes down a few points and start throwing chairs around the room. But hey, this is an amazing time to be alive :)

Thanks for the kudos I think short term we go to 1060ish. But the market price action will tell us when it wants to correct.

Now we have these guys that sold out at 980ish, say they are looking for shorts--because the market didn't allow them to get back in, and Cramer on his show said the thing that is working is buying the dips because we haven't had a pullback greater than 5.6%.

So maybe the market needs to rally higher so we can finally get a pullback.

I see these sites that have been so bearish now laugh about the people that are day trading this market who are making money.

The smugness and element of superiority is so in bred in some of these folks, that they don't feel anyone is entitled to make any money unless they do it by their terms!