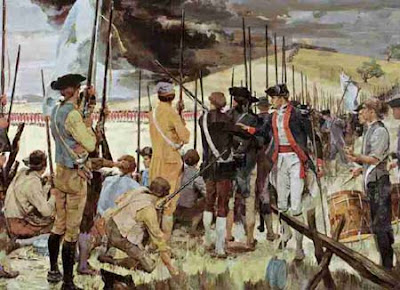 When BAC was threatening to walk away from Merrill, we had this email amongst the Feds discussing the proposed bailout of BAC.

The Government wanted a "pound of flesh" for throwing another $20 billion to BAC to help them complete its merger of Merrill: 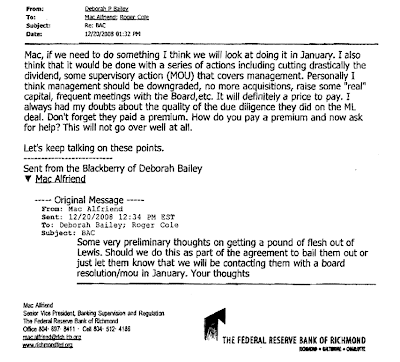 Today, NY AG Andrew Cuomo is coming after Lewis, who threatens to bring Bernanke and Paulson in to testify, since Cuomo is finally trying to extract a pound of flesh.

Now Wall Street is threatening the world, that it will collapse because of the PIIGS in Europe; or ostensibly because of proposed new taxes on bonuses.

Last week, Wall Street said it was going to implode if Bernanke didn't get re-elected.

And every banker, who now knows he won't get bailed out again, has every prop desk, (of which, of course, makes up just a minuscle portion of their profits) hit every bid with every click, in their organization, because the vaunted carry trade is now finally causing some damage, and every other banker, doesn't trust any other counterparty on any of their derivative transactions, that no-one would unwind.

Which causes the Wall Street bears to start their strutting again. As they hope for the implosion of the world again.

Back then, the threats from the bear were real. Now Wall Street pocket is on the verge of being picked, so they want to run it in the ground.

Well, hit it some more then. Let's see what you got.

Let's see the whites of your eyes!
Posted by Palmoni at 8:29 PM

I may be dead wrong on this but it seems to me that this is just a bonifide correction.

Like all corrections it has been sharp, dramatic and scary. All the things a good correction should be. It has the bulls questioning the up move as a phony rally. I like that.

All bull runs get corrections now and then. Its very healthy. And they're totally unpredictable as to when they happen. We had a couple corrections lite with 4-5% drops. This one is more in line with historical corrections pushing 9-10%. This appears to be textbook as far as corrections go.

So now I'll be totally wrong and the world will end as the bears predicted. lol

interesting article. In the midst of all this carnage, one tends to forget that we're in the middle of a global recovery (although that may be hard to see right now).

LoL, all these bears showing up lately on the blog, must have been waiting for this day to let out some frustration.. Enjoy it while it lasts, cuz it wont last long.