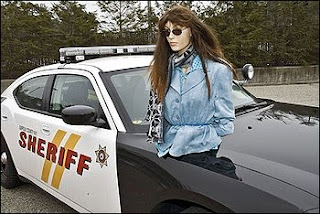 For being a "passenger" in the passenger lane.

ISLANDIA, N.Y. -- The tip-off was the sunglasses.

A New Yorker faces a $135 traffic fine for using a mannequin as her "plus one" in the high-occupancy vehicle lane of the Long Island Expressway.

An alert sheriff's deputy on Long Island became suspicious this week when he saw the "passenger" wearing sunglasses and using the visor. The problem: The sky was overcast.

Don't these cops have anything better to do??
Posted by Palmoni at 11:09 AM