Father waterboards her daughter who couldn't recite her ABCs 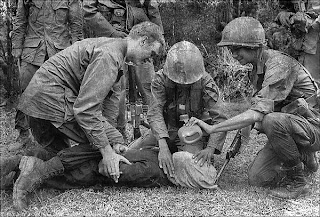 A U.S. soldier has been accused of "waterboarding" his four-year-old daughter because she would not recite her ABCs.

Joshua Tabor, 27, of Yelm, Wash., allegedly beat the child before holding her head under water Sunday night in the family's kitchen sink, The News Tribune reported.

Tabor reportedly told a police officer that he and his girlfriend "held her down on the counter and submerged her head into the water three or four times until the water came around her forehead and jawline," according to the newspaper.

The suspect said he punished the girl for "refusing to say her letters."

Tabor, a soldier at the Lewis-McChord base in Tacoma, Wash., has been charged with second-degree assault of a child and is set to appear in court Feb. 16.
Posted by Palmoni at 10:47 AM