Tax the banker bonuses or kidnap them? 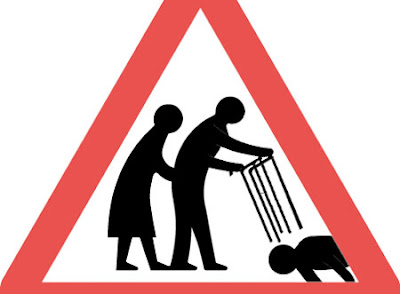 That's what happened when a bunch of pensioners lost their money:

A gang of pensioners allegedly kidnapped and tortured their financial advisor after losing £2million savings in the credit crunch.

James Amburn was ambushed outside his house, hit over the head with a Zimmer frame and bundled into a car, it is claimed.

The OAPs then bound the 56-year-old with masking tape and threw him in a cellar for four days until he agreed to get their cash from a bank.

American-born Mr Amburn said the ambush took a while “as they ran out of breath”.

He added: “The fear of death was indescribable. They bound me with masking tape until I looked like a mummy.”

Mr Amburn was driven 300 miles from his home in Speyer, Germany, to one of the pensioner’s homes in Lake Chiemsee, Bavaria.

His ordeal ended when he faxed a Swiss bank to get the cash. He secretly scrawled a message to call police.

The Colombian company announced a restructuring of the merger and plans on selling 10million shares. They expect the merger to close December 18th. Was this the news you were expecting? Thanks!! :)

No but after the 18th I'm sure we'll hear something else..because the other financing deals would of had to be predicated upon the closing of the merger.

Ever look at Ventana gold?

It was the biggest winner of any gold stock

The idea that gold properties can be substanially undervalued in Colombia is not a foreign idea..Let them close the merger--and then, I'll start throwing up the info on the properties that were merged into the shell

Palmoni, what do you think about NYT?

Just one quick question, Minatura International LLC is the entity that controls the title deeds and mining licenses if I understand it correctly. So this updated merger is still the same as the original but was restructured differently to meet the international rules/requirements? This paragraph in the statement seems to suggest it...

"Paul Dias, the CEO of MGOL, indicated that the restructuring is necessary to effect the recommendations, resulting from the legal and accounting analysis from Colombian and US legal and accounting experts, received subsequent to entering into the original agreements, while producing essentially the same results."

Thanks again! I'm just excited with this update and I just came out of my first final and my mind is a bit slow at the moment :P

anno- what school do you go to and what major?

i remember trading all the time before class during the dot com days.

same thing I did at school way back--had finals and then rushed to the pay phones to see what was going on at the boards hahah!

I attend Chapman University and I am majoring in Political Science with Business and Economics minors. Nothing beats day trading options in class with an iphone :P

If the data is real we'll have Ventana^2!

looks like GCI when it was under 10--but it still has a bit of the Dubai cloud--that being said, there are rumors that Nakheel is making the full bond payment Monday...though unrelated its not from a psychological level

i think its a buy here but its a frustrating stock