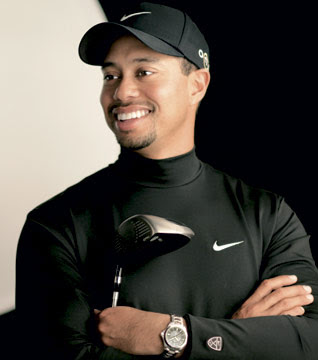 Tiger Woods was drinking before he wrecked his SUV two weeks ago, a witness told a Florida Highway Patrol trooper.

That witness was the same person who pulled Woods from his damaged truck, a document released this afternoon states. Elin Nordegren Woods, Tiger Woods' wife, told Windermere police that she dragged the injured golfer from his Cadillac Escalade about 2:25 a.m. Nov. 27 with the help of a golf club.

The document does not give the witness' identity, and a spokeswoman for FHP said she cold not immediately confirm who gave investigators that information.

That same person told troopers the champion golfer was prescribed Ambien and Vicodin, the document states.

Now about that snoring. Woods was sent to intensive care, where he was intubated to stabilize his breathing:

At the time of the 911 call, neighbor Jarius Lavar Adams told dispatchers that Woods was asleep on the lawn, snoring. “Although the body can snore in any state of unconsciousness, it’s unlikely he was snoring,” said the source. “That was the sound of an airway that wasn’t stable. That’s part of the reason there was an intubation when he got to the hospital.”

Even "Live with Regis" is in on this gig. They ewere trying to calculate the number of mistresses Tiger had, (from 6-9 then) so Bryant Gumble asked, "How do we keep score?"

Kelly Ripa said, "You tell me. You're a golfer."

Gumble said, "A lower number is best in golf."

Now you know why Bill Clinton was a voracious cheater on his golf game!

The next step that you can bank on 100%, is that Tiger will be going into sex addict rehab.

Why else has Elin, after signing a new pre-nup, now supposedly moved out of the house? The only room that Tiger hasn't banged a mistress in has been the bedroom that he slept in with his wife! 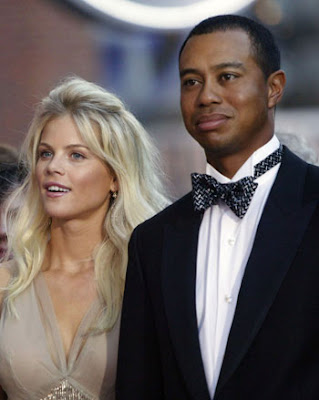 And now notice how Tiger has developed a slightly darker skin shade as the story becomes more sordid? 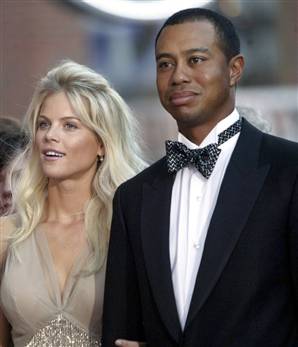 Here's the same picture earlier in the week.

Tabloid journalism at its best!
Posted by Palmoni at 6:30 PM

what do you think about SPRINT? "S"

You'll always look brighter with a closer shot in a photo. Back away and everyone, especially black people appear darker. Pics are exactly the same.