Moody's says US debt is "resilient" instead of "resistant" but the story in the WSJ is misleading.

Moody's Investors Service says the U.S. and U.K. must prove they can whittle down their ballooning deficits to avoid threats to their triple-A credit ratings.

In a report released on Tuesday, Moody's set the two countries apart from other top-rated sovereign borrowers, calling them merely "resilient" rather than "resistant," a label it applied to Canada, France and Germany, where public finances are in better shape.


Under the most pessimistic scenario put forward by Moody's, the U.S. would lose its top rating in 2013 if economic growth proves anemic, interest rates rise and the government fails to dent the deficit or recover most of its assistance to the financial sector.

Unlike several years ago, "now the question of a potential downgrade of the U.S. is not inconceivable," says Pierre Cailleteau, chief international economist at Moody's. "In a world that has lost its compass a bit, people want to understand what happens to risk-free assets." 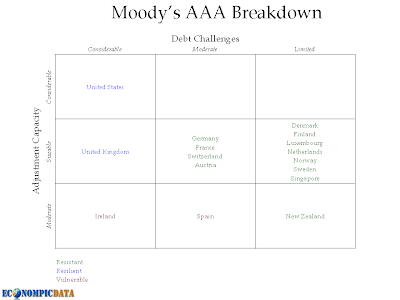 The US and UK were not just downgraded to "resilient" from "resistant." That had already happened before as the above chart indicates.

The only difference was, that back in March it was CNN that was doing the reporting on Moody's.

This time, its the WSJ.

Moody's may be rehashing old stuff but the market does tend to get spooked rather easily these days.

I sense a shakeout in the works before the next leg higher.