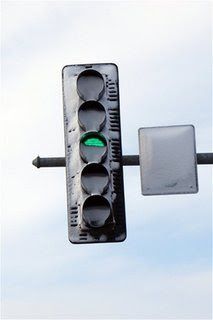 Last week had a big snowstorm in Wisconsin, and my Mom was telling me that the snow wasn't melting on the one traffic light in town. Maybe the traffic light cleaners will be some of the new jobs created by the Obama stimulus plan!

Green Bay — Some Wisconsin communities that have installed high efficiency traffic lights are discovering the energy-saving bulbs are a hazard in a snow storm.

City officials say the LED lights use less electricity and don't give off enough heat to melt ice or snow. So when the snow falls and the wind blows, the traffic lights are obscured.

That's led to some traffic crashes at intersections where drivers aren't sure whether to stop or go. It's happened in Ashwaubenon, near Green Bay, and West Bend.

City crews have manually been scraping the ice and snow off the traffic lights. Public works officials say the LED lights have saved thousands of dollars in monthly power bills.
Posted by Palmoni at 7:49 AM