So this was six weeks after the bottom, April 24, in Barron's magazine.

How did that work???

How did that work???

And how could the bulls and the bears get is so wrong???? At least somebody called them at the carpet when this poll came out in April!

I'm rehashing this, because we have punditry out in force, giving us their snake oil targets for next year. But its all dressed up in charts and stories, because snake oil needs to be pimped to be sold. But today, at least one firm, Prudential, is coming out with a forecast for 2010 that will be at least reasonably accurate: 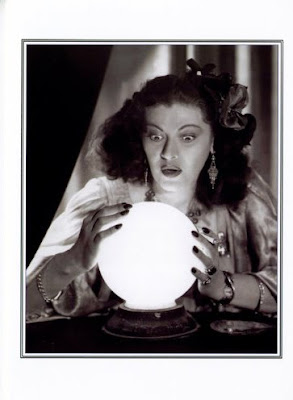 Praveen, the company’s chief investment strategist, forecasts that the Standard & Poor’s 500 Index may rise to 1,350 next year, representing a gain of 21 percent from yesterday’s close. Stocks in emerging markets and Europe may advance more, climbing about 25 percent next year, he said in a Bloomberg Television interview from Mumbai.

Praveen’s estimate is more optimistic than JPMorgan Chase & Co.’s Thomas Lee and Goldman Sachs Group Inc.’s David Kostin, this year’s most-accurate forecasters, who say the S&P 500 may rise to 1,300 and 1,250, respectively, in 2010. The average estimate of 10 brokerages is for 1,223, according to data compiled by Bloomberg. The benchmark U.S. gauge has climbed 23 percent this year, compared with 2008’s 38 percent slump.

“We are a little more aggressive in our targets for the U.S. equity market,” Praveen said. “Both on the macro side as well as the earnings side, we are likely to get upside surprises.”

The bulk of the gains will come in the first half of the year, with concerns of higher interest rates countering the impact of an economic recovery on stocks in the second half, Praveen also said.
-------

If you don't want to buy my 1440 forecast in the S&P by June, then buy Prudential's.  Because it is the most bullish on the street.

Which means it will be the one that will pay you.
Posted by Palmoni at 8:07 AM

Do you have aby suggestions the on Big Caps that you said money will go into?

looks ok on the charts

[b]**NOTE:[/b] We are your ONLY Free Softcore Adult Playground with over 20 Free Social Communities built towards your favorite fantasy.

You don't have a favorite fantasy? You should.

Don't worry, we have you covered.

With over 20 Free Hot Social Communities to upload Pictures, Videos and Blogs we are sure to have what you want.


[b]Check it out, have some fun, interact and enjoy all the free stuff.
[/b]