Judge jails homeowners instead of burglar 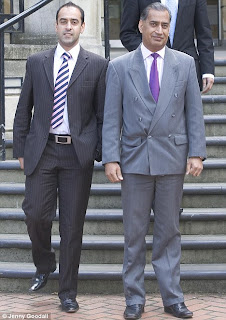 Check this story out--the judge must of thought the criminals were bankers.

A millionaire businessman who fought back against a knife-wielding burglar was jailed for two-and-a-half years yesterday. But his attacker has been spared prison.

Munir Hussain, 53, and his family were tied up and told to lie on the floor by career criminal Waled Salem, who burst into his home with two other masked men.

Mr Hussain escaped and attacked Salem with a metal pole and a cricket bat. But yesterday it was the businessman who was starting a prison sentence for his 'very violent revenge'.

Jailing him, Judge John Reddihough said some members of the public would think that 56-year-old Salem 'deserved what happened to him' and that Mr Hussain 'should not have been prosecuted'.

But had he spared Mr Hussain jail, the judge said, the 'rule of law' would collapse...

They were tied up and told to get on the floor if they did not want to be killed. One of Mr Hussain's sons managed to escape and alerted Mr Hussain's younger brother Tokeer, 35, who lived a few doors away.

Mr Hussain made a break for freedom by throwing a coffee table at his attackers. He and Tokeer chased the gang and brought Salem to the ground in a front garden. 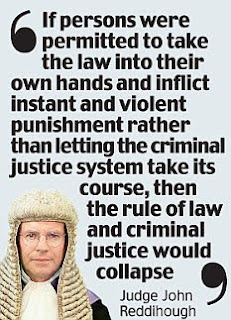 Reading Crown Court heard how Mr Hussain and his brother then beat Salem while he lay on the ground, using a cricket bat, a pole and a hockey stick - leaving him with a fractured skull and brain damage following the 'sustained' attack.

'If there was a call to arms it was down to the extreme moment of stress,' he said. Mr Wolkind said Mr Hussain, a devout Muslim, blamed himself for the attack and felt guilty for not protecting his family properly. 'It will take him a number of years to recover,' he said.

The court also heard from psychiatrist Dr Phillip Joseph who said Mr Hussain was a calm person who kept himself in control, but that his body had chosen the 'fight rather than flight' option.
--------------

Instead they get jail for protecting their house.
Posted by Palmoni at 8:45 AM

Check out AMED...massive short position with shorts getting killed since the barron's story over the weekend. Dec 50s in sight and still cheap.

Ridiculous story and judgement there. If anyone enters my house and wants to hurt my family or take my property they'll answer for it some how...

What a twisted view by a judge. Unfortunately, Canada us not far away from such liberal thinking about crime. Defend yourself in your own home and kill an attacker there and YOU get prosecuted. Thankfully, we here in Michigan have the castle doctrine law.

Palmoni, do you know why ABX is getting no love? are you just sitting tight with them?

You can beat a burglar into submission, but you cannot go beat the vegetables out of him to the point of making him retarded when he's already down. That's the point of contention and that's why the brothers need to serve some time.

Oh, I'm supposeed to concern myself with the welfare of an intruder who may well be there to kill me and my family. Is that how it works??
Not in my book. You start violence against someone and as far as I'm concerned you're fair game for any and all violence coming back at you including death.
The judge is worried about the homeowners " taking the lawinto thier own hands". My view is he should tell the criminal that criminal activities are a hazardous endevour and there is a great risk to you in engaging in such behaivior.

I'm sitting with ABX and getting annoyed with the action

Maybe the brothers should have cut of his testicles too while at it? And gouge one eye out? And go over the burglar's house and beat the shitty out of his family too? After all, it's fair game, right? Better yet, maybe the brothers could shot the man with a gun after doing all the above?

The brothers need to go to jail for excessive violence that isn't necessary.

Thats right. Start in with the false analogies.
The brothers stopped a threat to the community.....a guy wielding a knife and subdued him untill they felt the threat had been eliminated.
I don't see the part where they were the criminals. Maybe its ok with you that a guy who just tried to attack a family can just walk away in total peace because he, for the moment, has left the scene.
Lets just say we agree to disagree and if I'm on the jury for this type of case, there won't be any conviction from that jury of the homeowner. I'll enjoy hanging that jury with bells on.

Do you want to cut of his testicles, though? And cook it and feed his family? After all, he's scum and should be treated as such.

You got him beaten down so the authorities can come and apprehend the guy. There is no need for the brothers to be executioners and knock that guy into a retard. Causing someone brain damage as a punishment does not fit the crime. It is too severe for that crime. What fits the crime is the burglar gets a prison sentence.

From what I understand, the jury released the burglar because he was beaten into a retard, more severe a punishment than the jury/judge could give him. So they let him go without jail sentence.

Excellent. At least now the brain damaged attempted murderer can't be much of a threat to the family or community.
I would suggest to Mr. Hug-a-thug that he move to a city like Detroit or cleveland before he spouts his liberal b.s. crying about the treatment of a hardened, cold blooded hoods. He can go to those areas and reason with the criminal hoodrats and see how far it gets him.
How far?? They would laugh and cut his throat for sport.

Someone breaks into my house and and attempts to harm my family.... I will blow thier head off...no question asked. Glad for the beat down...maybe others will think twice. Hope the judge gets voted out of office. He is an idiot.