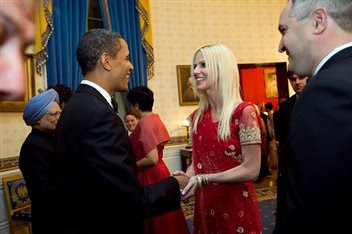 Back in June Desiree Rogers said this: 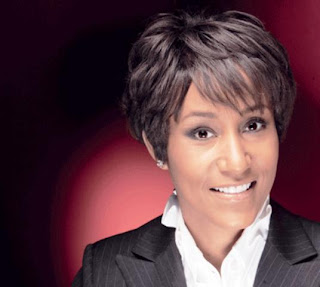 When asked what she does with event crashers, Rogers replied (to much laughter), that she's begun adding an extra table, row, or bench to every event she produces, as each time she found extra people would show up in hopes of gaining entrance. "Lots of people just come anyways, they won't take no for an answer," she said. "Finally I just said, 'Alright, come on in, it's no use kicking you out.'" 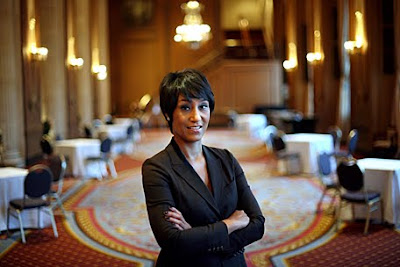 APRIL RYAN: Did she invite herself to the state dinner or was she a guest of, did the president invite her, or did she put her name on, no, that's a real question, do not fan [sic] at all.
ROBERT GIBBS: I, I, Jonathan?
RYAN: I'm serious. No, seriously? Did she invite herself or did the president ask her. Her name was on that list and social secretaries are the ones who put the names on the list.
GIBBS: Right.
RYAN: Did she invite herself, or did the president--
GIBBS: Right, was she at the dinner? April, April, calm down. Just take a deep breath for one second. See, this happens with my son. He does the same thing.
[reporters in the briefing room: Oooooh!]
RYAN: Don't play with me!
GIBBS: I'm not.
RYAN: I'm being serious. Do not blow at all.
GIBBS: And I'm giving you a serious answer. Was she at the dinner? Yes.
RYAN: Was she an invited guest?
GIBBS: She's the social secretary. She had the primary responsibility--
RYAN: No, social secretaries are not guests of the dinner.
GIBBS: She had the primary responsibility for running the dinner. I'm going to get back to weightier topics like 98,000 men and women in Afghanistan.

And for those that want to watch it:

P who do you root for in college..

Anno... Fld hasn't been great this year without harvin and murrphy