Miss California has a sex tape 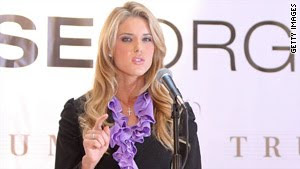 Carrie Prejean sued for religious discrimination and wanted a million dollars; the pageant sued for the breasts that they bought her for $5200.

Then the case gets put away--signed sealed and delivered, after the pageant pulls out their Trump card--a solo sex tape of her.

According to TMZ, the solo video was so racy they couldn't post it.

That video would halt her church speaking tour--so she folded like a cheap suit.

Because her book comes out Monday!

Now her book signings get interesting!
Posted by Palmoni at 7:23 AM