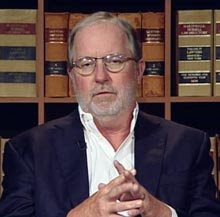 Always a great read. He also had these wonderful paragraphs:

From those highs at or near $12.75 trillion in total assets, banks have deleveraged to the point where they hold $11.75 trillion as of last week. This is, without question, the largest year-on-year unwinding of bank assets in this century, and almost certainly it is the largest one year decline in modern American history. After all, the winding up was the largest in history, so why shouldn’t the winding down be the same?

How long can this go on? We are not computer sophisticated enough to make complex, elegant models to produce a forecast. We shall leave that to the likes of Long Term Capital Management’s Nobel Laureates… oh, wait, they’ve blown up, dependent upon their computer models. Oh, OK then, we’ll leave that to the good folks at Lehman Brothers economics department with their sophisticated computer models. Oh, wait, they’ve blown up too, as their models went awry? Then surely Bear Stearns widely acclaimed mortgage backed operation will have the models and sophistication necessary to make an elegant and reliable forecast, won’t they? Oh, they’re gone also? Well then, perhaps the Ph.D dominated economic forecasting prowess of the IMF can be drawn upon? Oh, wait! It was they who long ago forecast that the world would run out of oil by the turn of this century? Darn!

We’ll turn then to something a bit simpler… nice, stable trend lines drawn from the data supplied by Mr. Pomboy. Casting a line back to the turn of the century, there is “support” for total bank assets somewhere at or near the $10.0-$10.5 trillion dollar level, and that might come to pass sometime in mid’11. By then, the
US economy will likely have grown just a bit more, and the relationship between bank assets and GDP will have returned to more normal levels as the great unwinding winds its way to fruition. We’ll “take” the forecast from this trend line and give it a lot more credence and rely upon it a lot more certainly than the models of LTCM, Lehman, Bear and the IMF. Of that much we are certain. Complexity has always bred contempt.

I wonder where that $1 trillion dollars went???

OK Palmoni,
Should I hang on to FAS? I was banking on the year end rally.