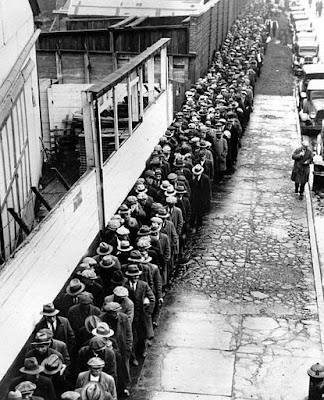 You give a banker $25 billion, and you can't even see the piece of paper, but it takes weeks before we get an extension of Unemployment Benefits. So now we throw in 14 more weeks for the unemployed, plus another 6 weeks if you state's unemployment rate is over 8.5%.

But let's look at the unemployment bill, because it shows how many people lost or exhausted their benefits in September. And if you lost your benefit in September, you then weren't counted on the Unemployment rolls.

September we had 402,751 people fall off of the unemployment rolls. Wouldn't then it be fair to add these folks to those unemployed?

We were told that 7,000 people were falling off the unemployment rolls each day. Doesn't September have 30 days? Wouldn't that then equal 210,000 people who had fallen off the rolls--and not the actual number of 402,751?

It looks like a significant source of the improvement in the slowdown of the unemployment rate, is just the unemployed falling off of the rolls.

And not being counted.

Because when it comes to the unemployed, they don't seem to care about the disenfranchised.

Because they muddy the Government's phony stasitics!
Posted by Palmoni at 12:17 AM

i'm hearing a lot of bear bloggers predicting a very nice fall below 1000 on the s&p....are you still short anything at all.

if it does drop below that number are you just holding your longs?

thanks....to tell you the truth...i keep up with a lot of bear bloggers and that screwed me up again...just like when i based my decisions with ZH...nothing wrong with ZH but the market doesn't always run the way we want.

do you believe that Yanks winning means higher market?

Bear bloggers are stupid. They like to bet against America. So yes, there is something wrong with them mentally.

I'm not short anything now.

And after this latest whipsaw, I'm just sitting tight.

I don't think the market will come in