You take what you can get 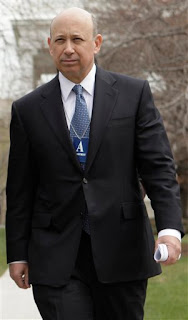 Even if its just a PR ploy.

“We participated in things that were clearly wrong and have reason to regret,” he said. “We apologize.”

Goldman also called up Buffett, and asked him to be an advisor on Goldman's initiative to spend $500 million to help small business.

So quit asking Goldman about their counterparties. And don't ask Goldman if they had "hedges" with SocGen!
Posted by Palmoni at 6:48 AM