A tale of two stories and different debt 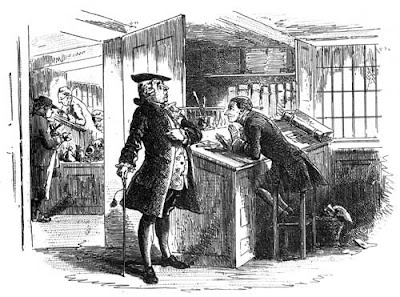 Bloomberg had this story on PIMCO:

Gross boosted his $192.6 billion Total Return Fund’s investment in Treasuries, so-called agency debt and other U.S. government-linked bonds from 48 percent of assets in September while reducing his position in mortgages to the smallest since May 2004, according to data on Pimco’s Web site yesterday.

What the story didn't say was this:

PIMCO dumped their mortgage holdings for shorter term Government paper. Over $80 billion worth. That the taxpayer picked up. PIMCO front ran the QE from Bernanke, who willy nilly bought hundreds of billion worth of mortgage paper. And Gentle Ben, bought it from PIMCO, who got his willy in front of the taxpayer, to take another piece on the Government bailout of those institutions closest to the Fed.

All Bloomberg had in their story was this line:

The fund’s holdings of mortgage debt fell to 16 percent of the portfolio by market weight from 22 percent the month before, matching their smallest percentage of the assets since May 2004.

Go back to March, and you'll then have a clearer picture:

Graphically, it looks like this courtesy of ZH. The red line is PIMCO's mortgage holdings, the blue line is the newly purchased shorter term Government debt. 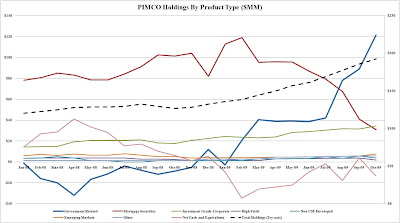 So on behalf of PIMCO, I'll thank the taxpayer for the giant stipend!
Posted by Palmoni at 7:38 AM

Hi,
I used ”Credit Solution” to settle my debt and avoid bankruptcy. They managed to reduce my debt up to 58% and improve my credit score. It's legitimate . I came across this company on NBC News Special Edition. Check it out here:
http://CreditSolution.com

Note:It's advisable to fill out the short form.Let them call you back.The line is always busy due to so many customers.