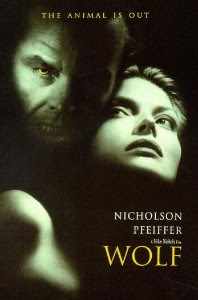 I went to see The Blind Side this weekend, but I couldn't believe the line of teenage girls outside The Twilight Saga: New Moon. I hadn't seen lines like that since the Titanic.

But does anyone see how the press fawns over Pattinson and Stewart?  I suppose this weekend, you had $141 million reasons why. But there was one mystery solved--why Pattinson smells. When they made the movie, people complained on the set. Now no-one cares. It's the paparazzi's fault.

So he doesn't shower---but would someone get him some spray tan?

We've all heard that Robert Pattinson doesn't change his clothes more than once a week and is kind of smelly (just Google "Robert Pattinson smells" if you don't believe us), but it turns out it's all a strategic move to foil the paparazzi, as we learned at the Cinema Society and D&G-hosted New Moon premiere on Thursday. 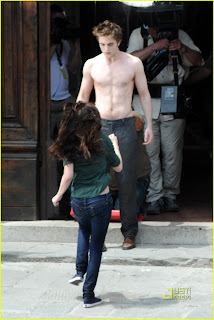 Nurse Jackie star Peter Facinelli, who plays Robert Pattinson’s father in the Twilight movies, takes credit (blame) for Robert Pattinson’s rumored body odor problem. “He’s smart, because if he doesn’t changes his clothes and the paparazzi get pictures of him in the same outfit all the time, then they can’t sell the pictures,” Facinelli told us at Thursday's Cinema Society screening of Twilight Saga: New Moon. “That’s what I said he should do; I said, ‘You should not change your clothes, this way, how are they going to sell the picture of you in the same outfit all the time, because it will look like it was from the same batch.’” Father knows best.

Pattinson’s co-stars deal with the issue in their own ways. The lovely Ashley Greene, who plays Pattinson’s sister Alice Cullen, tries to avoid breathing when in his presence. “You know what, I think maybe out of a defense mechanism, I don’t sniff him,” she said, laughing. Kellan Lutz, who plays brother Emmett Cullen, admires how Pattinson still looks great, even in musty attire. “He’s got a great style. I wish I could pull off the easiness that he does,” Lutz told us. And director Chris Weitz is actually grateful that Facinelli gave R-Patz the sage advice. “I can smell him coming, that’s the nice thing,” Weitz explained.
------
Look what his girlfriend and co-star, 19 year old Kristen Stewart, had to say with this gem.

"I do wish that people would focus more on the work, and I can't say that I don't take it personally" "But I understand it, because what you do as an actor is so tied up in who you are as a person," she continues with a deep sigh. "What really kills me — it really rips me up — is when people think I'm abrasive, inconsiderate or ungrateful because I don't go outside in a bikini and wave to the paparazzi. Come on!"

I guess I just grew up on better Wolf dialogue!

Yeah, I love how stars want attention....but only on their terms. You want to be a star, you get attention both when and not when you want it. It comes with the job. As for mr stinky, if you want to wear the same outfit to foil the cameras, why not buy several sets of the same clothes? That way you can wash and still be boring looking. As for the neurotic behaivior of not bathing, its sure to cut short his time in the sun of stardom. Those kinds of antics wear off real quick. I guess it gives new meaning to attitude and the phrase " so superior they think their sh*t don't stink " except dude does it with bathing. Hes so special you'll have to tolerate his stink. I think not.