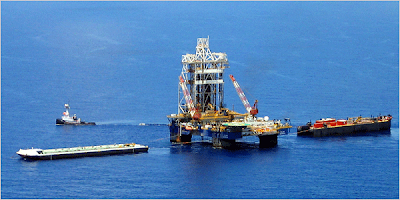 Oh My! Wall Street is finally catching on!!!


Is China About To Make A Monster $7.5 BILLION Oil Acquisition In The Gulf Of Mexico (DVN)

Wait--Dealbook has the inside scoop on the "story!"

Devon Energy, the independent oil and gas firm, surprised many on Monday by announcing its plans to divest all of its offshore and international energy properties to concentrate on its domestic onshore energy businesses.

The sale, which the company estimates could generate after-tax proceeds of between $4.5 billion to $7.5 billion, would be one of the largest sales in the Gulf of Mexico in recent history and could draw some major bidders with deep pockets, ranging from the major oil companies to foreign competitors, including the Chinese.

Oh my! What a surprise! Oooohh. Such breaking news! What a journalistic breakthough!

With this picture. Remember the oil conspiracy story? I said that China wanted to buy an oil company, and the play was Devon's assets. And the backing away from derivatives gone bad, was China's gambit to muscle the deal, to get it done.

And how appropriate. Because didn't CNBC have a story about solar panels on China's birdnest this morning?


And then, we had more on Devon here. They had an informal offer of $110. Instead, they are now selling their assets.

So today, another month after that and Raj, and 10 weeks after the real story, Wall Street is now plugged in on what is really happening--with "breaking news!"

Maybe Wall Street was afraid of the leaks!

Why wouldn't they? It's systemic!

As they say on SNL.