Steve Wozniak had accelerator issues with his Prius 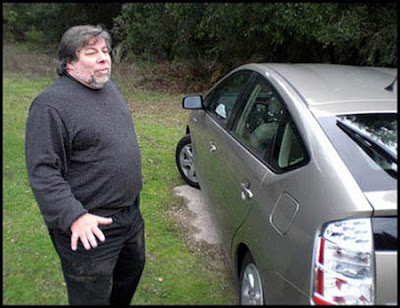 Speaking at the Discovery Forum, the co-founder of Apple Computer, Steve Wozniak had this to say:

"Toyota has this accelerator problem we've all heard about," Wozniak said. "Well, I have many models of Prius that got recalled, but I have a new model that didn't get recalled. This new model has an accelerator that goes wild but only under certain conditions of cruise control. And I can repeat it over and over and over again--safely."

"This is software. It's not a bad accelerator pedal. It's very scary, but luckily for me I can hit the brakes," he said.

Here is what Steve said last November, in a tech forum when we were told this was a floor mat problem

I have owned many Prius's. I currently drive a 2010 one. Let's say that I'm in some place where the speed 85 mph is legal. I can nudge my cruise control speed lever and my speed barely goes up, say from 80 to 81.I nudge at again and again, up to 83. Then I nudge it again and the car takes off, no speed limit. Nudging the cruise speed control lever down has no effect until I've done it about 10 times or more. By then my Prius is doing 97. It's scary because it's so wrong and so out of your normal control. I tested this over and over the night I observed it.

It's scary because you don't think of things like putting the car in neutral when this happens. I am sure you can't turn the car off with the keyless power button, the only option on this model.

Braking does disable this scary cruise control effect. It is a natural response, so the problem is mitigated a great deal.

I have not seen this happen before so I think it's new to the 2010. I have the package which includes parallel parking assist and cruise control distance limiter.
Posted by Palmoni at 4:54 PM