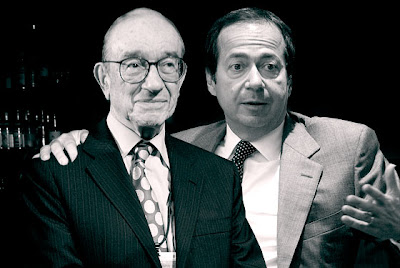 From FT:
Paulson & Co, a hedge fund that made billions of dollars betting against subprime mortgages, has received a request for information from the Securities and Exchange Commission in connection with an investigation into complex securities at the heart of the financial crisis, according to people familiar with the matter.

The firm run by John Paulson profited from the subprime crisis by placing bets against securities known as collateralised debt obligations, or CDOs, which promised investors returns from pools of mortgages extended to borrowers with tarnished credit histories
-----

Remember when Laurence Kotlikoff of Boston University said this:

"The Securities and Exchange Commission should be very interested in any financial company that secretly decides a financial product is a loser and then goes out and actively markets that product or very similar products to unsuspecting customers without disclosing its true opinion," said Laurence Kotlikoff, a Boston University economics professor who's proposed a massive overhaul of the nation's banks. "This is fraud and should be prosecuted."

And the McLatchy article of the Goldman Sachs and Paulson & Co fraud?

WASHINGTON — In 2006 and 2007, Goldman Sachs Group peddled more than $40 billion in securities backed by at least 200,000 risky home mortgages, but never told the buyers it was secretly betting that a sharp drop in U.S. housing prices would send the value of those securities plummeting.

Goldman's sales and its clandestine wagers, completed at the brink of the housing market meltdown, enabled the nation's premier investment bank to pass most of its potential losses to others before a flood of mortgage defaults staggered the U.S. and global economies.
--------
Why isn't the SEC asking Goldman for the same information?
Posted by Palmoni at 7:40 AM