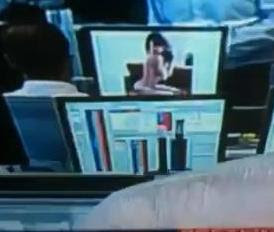 It seems that the Aussies at Macquarie were not as opened-minded as one would’ve hoped. David Kiely, the client investment manager who took a few ganders at Miranda Kerr yesterday while his floor was being filmed, has been “waiting at home” since the “incident” while his bosses, who “take matters such as the unacceptable use of technology extremely seriously,” deal with the matter internally.
Posted by Palmoni at 5:00 PM