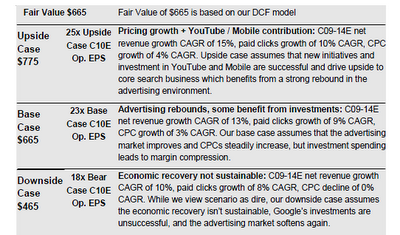 Super Bowl ads, broadband expansion...
The company said it will begin in certain test markets to offer broadband service capable of delivering bits and bytes at speeds 100 times what most Americans now receive from their cable and telephone companies.
...and Droid phones, have all helped compress the multiple, as GOOG isn't just a pure play on search.

And the varied initiatives threaten to compromise the company's focus on its successful core business -- Internet search. Several analysts pointed to the examples of Microsoft and AOL, which suffered setbacks when they spread themselves thin

But the chart finally looks good for an entry point, and the stock is at 17X 2011 estimates.
Posted by Palmoni at 7:30 AM