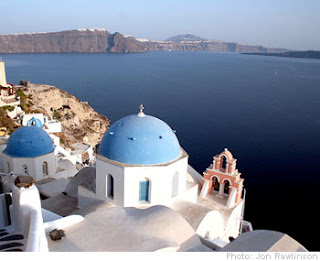 Goldman Sachs helped the Greek government to mask the true extent of its deficit with the help of a derivatives deal that legally circumvented the EU Maastricht deficit rules. At some point the so-called cross currency swaps will mature, and swell the country's already bloated deficit.

Greece's debt managers agreed a huge deal with the savvy bankers of US investment bank Goldman Sachs at the start of 2002. The deal involved so-called cross-currency swaps in which government debt issued in dollars and yen was swapped for euro debt for a certain period -- to be exchanged back into the original currencies at a later date.

But in the Greek case the US bankers devised a special kind of swap with fictional exchange rates. That enabled Greece to receive a far higher sum than the actual euro market value of 10 billion dollars or yen. In that way Goldman Sachs secretly arranged additional credit of up to $1 billion for the Greeks.

This credit disguised as a swap didn't show up in the Greek debt statistics. Eurostat's reporting rules don't comprehensively record transactions involving financial derivatives. "The Maastricht rules can be circumvented quite legally through swaps," says a German derivatives dealer.
-------
Maybe that's why their are rumors that Goldman has all the credit default swaps on Greece's debt.

They helped them hide it!
Posted by Palmoni at 7:53 AM

There are lies, dirty lies and then state budgets ... In and of itself a Greek bankruptcy or bond default should -in theory- not affect the Euro as such very much, Greece being maybe 3% of the total. However, just as a Californian bankruptcy would reflect badly on the "state of the Union" as a whole so would the default of on EU country, coupled with the rising interest rates and thus further destabilisation of the remaining over-leveraged member states, make investors wonder when sovereign default across the board is likely. Thus they wouldn't commit themseves to bonds of longer maturity and that's the beginning of the end.