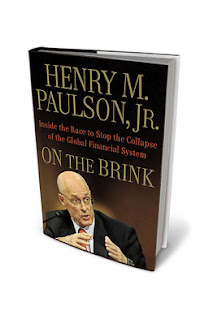 From Hank Paulson's book, On the Brink, describing the two days wen Lehman went under:

Anticipating another sleep-deprived night, I arrived back at the hotel exhausted. I went into the bathroom of my room and pulled out a bottle of sleeping pills I'd been given in Washington. As a Christian Scientist, I don't take medication, but that night I desperately needed rest.

I stood under the harsh bathroom lights, staring at the small pill in the palm of my hand. Then I flushed it—and the contents of the entire bottle—down the toilet. I decided I would rely on prayer, placing my trust in a Higher Power.

"What if the system collapses?" I asked her. "Everybody is looking to me, and I don't have the answer. I am really scared."

I asked her to pray for me, and for the country, and to help me cope with this sudden onslaught of fear. She immediately quoted from the Second Book of Timothy, verse 1:7—"For God hath not given us the spirit of fear, but of power, and of love, and of a sound mind."
Rest at WSJ:

I guess that only works for book headlines. Because the other day, Paulson said in his most gravely, fear mongering voice that, "we'd have 25% unemployment" if we didn't rescue AIG and its chief counterparty, Goldman Sachs.

So now, Lloyd pays himself $100 million at behest of the taxpayer!

No fear over at Goldman--but then, they're doing God's work, and they're not Christian Scientist either.

It's just the Goldman Sachs entitlement cult!
Posted by Palmoni at 6:00 AM