On CNBC today, Cramer highlighted what Goldman's PR spokesman had to say about the rumors of Lloyd Blankfein's $100 million bonus on deck.

"There’s speculation, and there is stupidity. This speculation transcends the simply stupid and takes it to an entirely new level."


And because of that, Cramer said Lucas Van Praag should get hazard pay. Because he was on the front lines in this war defending Goldman. Since, of course, they weren't financial terrorists! 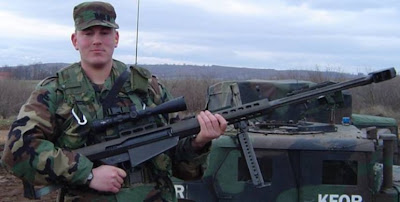 But back in the real world, we have snipers defending the "Green Zone" in Iraq. From 1500 yards out. A terrorist, strapped full of bombs on his body vest and his legs, believing he could have an early meeting with Allah, wanted to take some troops out.
He breached the perimeter, and was taken out by one of our finest. 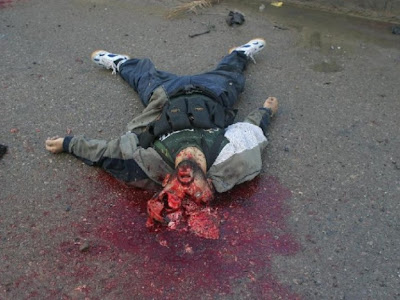 That's war.
So please don't equate the defense of a thieves to the front lines, where people defend our country, and where the words honor and respect have meaning.

And where bonus, is an extra 15 minutes of sleep.
Posted by Palmoni at 4:56 PM

Any ideas if that was taken with the 50 cal Berret or some other rifle?

what is your friggen problem?

what is your malfunction by posting that photograph? you have issues, dude.

I know its a horrible picture, but I couldn't take Cramer defending Goldman as though they were at war.

I have some friends that just came back from Iraq. Even the most well adjusted person in the world, has a hard time adapting when they first get back.

And you can't trivialize the trauma, or the hell that our troops go through.

I'm not in disagreement with the visceral reaction to the picture that some of your readers have shared, however, within the context of the post I believe it fits... It certainly caused me to pause and consider the reality of war, and how often we tend to marginalize or make trivial the real sacrifices made to protect our individual rights as Americans. The very existence of our right to freely express different viewpoints stems from the young people of this country that willingly put their life on the line, within circumstances that at times are best understood / spoken through an image such as this...

The reality of war (along with the "myth") brings out deep rooted ideologies and subsequent heated debate. I find it sad that the good folks actually fighting the battles typically find themselves forgotten or vilified within the debate, and rarely recognized for what for them at a minimum becomes a profound life altering experience, or at the maximum, a life ending one.