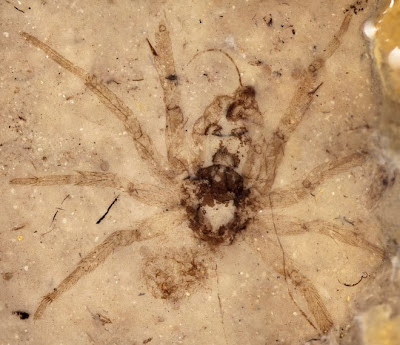 And it looks better than the week old dead ones in my garage!
-----
Scientists have unearthed an almost perfectly preserved spider fossil in China dating back to the middle Jurassic era, 165 million years ago. The fossilized spiders, Eoplectreurys gertschi, are older than the only two other specimens known by around 120 million years.

Spider fossils from this period are rare, because the arachnids’ soft bodies don’t preserve well. The pristine fossil pictured in these photos was probably created when the spider was trapped in volcanic ash. The ultrafine clay particles squashed the spider without breaking up the animals’ delicate cuticle as more coarse sediment would, Selden said.

E. gertschi shows all the features of the modern members of the family, found in North America, suggesting it has evolved very little since the Jurassic period, Selden said. “The scimitar-shaped structure you notice out of the male is so distinctive,” he said. “Looking at modern ones, you think, well, it’s just a dead ringer.”
-----
I think a Wall Street derivative desk calculated the "age" of the spider!
Posted by Palmoni at 8:09 PM