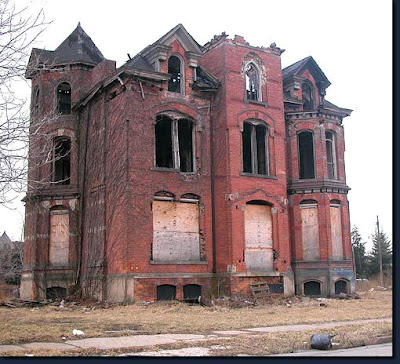 Look at what is going on in Detroit:

Detroit Mayor Dave Bing is struggling to save his city from fiscal calamity. Unemployment is at a record 28 percent and rising, while home prices have plunged 39 percent since 2007. The 66-year-old Bing, a former NBA all-star with the Detroit Pistons who took office 10 months ago, faces a $300 million budget deficit — and few ways to make up the difference.

Against that bleak backdrop, Wall Street is squeezing one of America's weakest cities for every penny it can. A few years ago, Detroit struck a derivatives deal with UBS and other banks that allowed it to save more than $2 million a year in interest on $800 million worth of bonds. But the fine print carried a potentially devastating condition. If the city's credit rating dropped, the banks could opt out of the deal and demand a sizable breakup fee. That's precisely what happened in January: After years of fiscal trouble, Detroit saw its credit rating slashed to junk. Suddenly the sputtering Motor City was on the hook for a $400 million tab.
-----

Why isn't Detroit Dubaing UBS? Tell them to pound sand, and don't pay them a penny.
Posted by Palmoni at 4:59 AM

I used to work in the D. You can see the former beauty of the paris of the west as Detroit was known. Proof that things change. I'll bet the people who owned that unique home could not foresee Detroit ever becoming the slumland it now is. A warning for all in the U.S. Just because we are top dog now is no guarantee we'll be that way forever.