Tiger has an alibi! 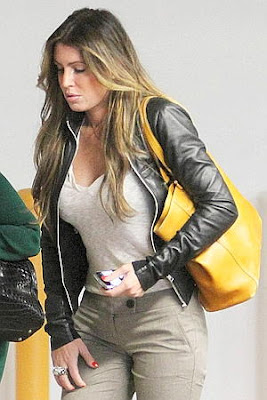 And it's a four page story in the NY Post:

'THIS is ridiculous. Not a word of it is true," Rachel Uchitel told The Post. "I told the Enquirer and Star that it wasn't true. I told them not only did I have information to disprove the story, but I offered to take a lie-detector test.

"It's the most ridiculous story. It's like they are asking me to comment if there are aliens on Earth. I found out who their sources were [Uchitel says she understands there were two sources to the story], which girls were blabbing.

"She got paid money to sell a story to the National Enquirer. I heard she got $25,000 and another girl got $25,000. The other magazines heard about it, but they turned it down because there was no hard evidence.

"She had a personal reason to make this up. She got herself invited on a trip that I went on [to Europe]. She conducted herself in a manner that was so embarrassing that the trip ended after a day. It was a total nightmare. I saw her again last week in Vegas. I was embarrassed by her behavior. She fell down the stairs at the restaurant because she was so wasted. She's a train wreck.

"I don't want people like that around me. In my business, I am around celebrities and very rich people all the time. People look into it badly. People say all the time: 'Rachel only hangs out with celebrities and rich people.' It's my job. I work in the nightclub industry. those are the people that come there, and the clients are my job...

'BUT Tiger and I are not friends. That's a whole different ballgame. I've only met him twice. He came in to The Griffin [the Meatpacking District nightclub where she worked as a VIP hostess] in the summer. As usual in my job, I got a call from a promoter that he's coming in. I went outside and brought him and his entire group in, walked them upstairs, introduced him to his waitress.

"I had never spoken to him before that. I had met him once in my entire life before that, for two seconds at a bar through a mutual friend who just introduced me. Period. He was shy and quiet and sitting with someone else. It had nothing to do with me.

"So I was literally on the phone for four hours with [my contact], who will also go on record, saying I was on the phone for hours trying to work out what the f- - - happened with their table reservation. Tiger's name, of course, was brought up because it was about protecting a celebrity. But it was nothing to do with me knowing him, about me having sex with him, text messaging him, sexy text messages -- the whole thing is ridiculous. I mean, he loves me? It's hurtful to his wife.

"I mean, who are these people?"

WHEN asked about what her connec tion with one of the sources is and what happened on the vacation, Uchitel said: "She was just a roommate of a friend who got invited at the last minute. This guy at the hotel gave her 3,000 euros to go upstairs with him, and then basically got the money back because two minutes into whatever they were doing, she passed out from too many Quaaludes.

"The guy came downstairs and was like, 'Rachel I don't know you, but you brought hookers here, and they are not even like hookers? This girl passed out on my bed, it was like gross. Like, who are these people?'

"And I was like, 'Oh, my God, I am so embarrassed, I am so sorry.' The whole thing got really weird.

"She's just a total train wreck, this girl, and decided because she heard me say Tiger's name a bunch and her and her wicked little friend are looking for a story . . . I think they probably misinterpreted because they are on so many drugs and just stupid. When I was arguing four hours on the phone about Tiger, they probably thought, 'Oh, Rachel knows Tiger.'

"The whole thing's a lie. Tiger never told me he loved me. They said they overheard him saying he loved me. It's just stupid. I've never texted or talked to him on the phone. I was talking to [the Vegas bachelor-party organizer] who will go on the record and back me up. The argument was about Tiger, but it was I didn't understand why there were cameras there and why they left."

Someone's getting a payday! 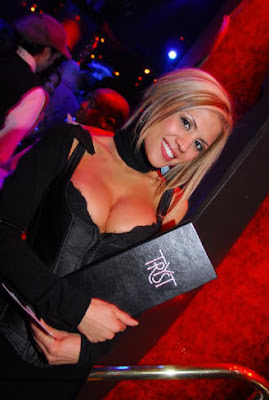 And with the Wall Street bonuses on deck, bottle-service is back!
Posted by Palmoni at 8:47 AM

Hey Palmoni,
Are those real? In my life when I encounter those,I come to find that they are just enhanced by a padded bra/enhancer or worse; they are silicone.
Back to serious business: What do you think about ANF and DGL?

I think that crack in gold under $1140 on Friday was a big trap--and now they have the shorts on the rope again.

I just don't see gold stopping at $1200--and what stops at round numbers? They always seem to go higher!