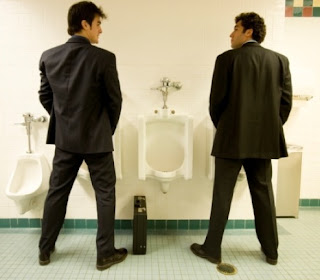 Yesterday, I put this piece out "Toilet prison" which ostensibly explained the rules of urinals. But you may have missed this tidbit:

And that's the difference between the leaks on Wall Street, and in the bathroom. Because the only bugs in Afghanistan bathrooms comes from leaks on the floor, and not from bugs in the ceiling. And it looks like urinal protocol has been violated on Wall Street!

But Goldman didn't.  Today, we have a piece on businessinsider titled:

How Goldman Designed Bathroom to Keep on Top of Rumors

Goldman said that their toilets were designed so every rumor would be out in the open. In fact, they "deliberately built it on one floor and had only one men’s room."

So the insider trading "leaks" aren't from Goldman's bathroom--or so they want you to believe!
Posted by Palmoni at 5:17 PM