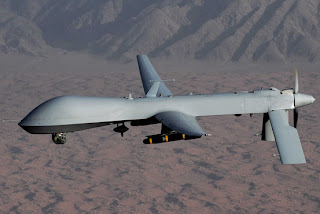 The Pentagon is deploying record numbers of drones to Afghanistan as part of the Obama administration's troop surge there.

The potential drone vulnerability lies in an unencrypted downlink between the unmanned craft and ground control. The U.S. government has known about the flaw since the U.S. campaign in Bosnia in the 1990s, current and former officials said. But the Pentagon assumed local adversaries wouldn't know how to exploit it, the officials said.

Fixing the security gap would have caused delays, according to current and former military officials. It would have added to the Predator's price. Some officials worried that adding encryption would make it harder to quickly share time-sensitive data within the U.S. military, and with allies.
Posted by Palmoni at 9:30 AM

To have no respect for your adversary is a formula for disaster.
How smug is that from the pentagon??
They wouldn't know how to figure the flaw out?
From an enemy that devises i.e.d. bombs to evade detection. Thinking that will cost lives on the ground.

wouldn't know how to exploit it?wtf is wrong with the Pentagon?