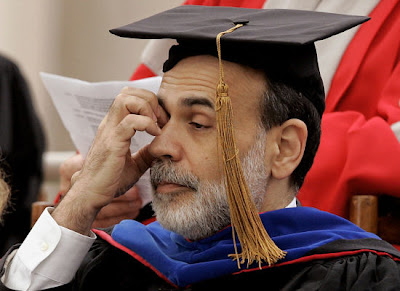 (with help from Denninger, who has a flair for the dramatic)

Information received since the Federal Open Market Committee met in November suggests that economic activity has continued to pick up and that the deterioration in the labor market is abating.


Those of you without jobs are now rolling off the unemployment rolls, so you don't count any more.  We in Washington DC and on Wall Street have our huge bonuses back, and thus the labor market - what we see of it anyway, is doing better.


The housing sector has shown some signs of improvement over recent months. Household spending appears to be expanding at a moderate rate, though it remains constrained by a weak labor market, modest income growth, lower housing wealth, and tight credit.


Credit continues to contract as shown by our most-recent Z.1 (below), but we're not going to tell you that: 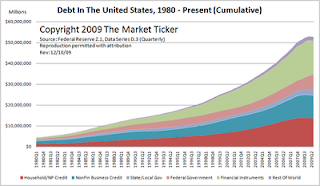 This, of course, means that people are spending a higher percentage of their incomes.  That in turn means that the squeeze - especially on the middle class - is getting acute.


Businesses are still cutting back on fixed investment, though at a slower pace, and remain reluctant to add to payrolls; they continue to make progress in bringing inventory stocks into better alignment with sales.


Walmart and others are laying off seasonal help ahead of Christmas because, surprise-surprise, sales suck!


We continue to pump the markets with every opportunity but unfortunately the effects are failing.  We are thus forced to lie lest you discern that the curtains are on fire and bolt for the door.

Although economic activity is likely to remain weak for a time, the Committee anticipates that policy actions to stabilize financial markets and institutions, fiscal and monetary stimulus, and market forces will contribute to a strengthening of economic growth and a gradual return to higher levels of resource utilization in a context of price stability.


Our stated purpose was to restart private credit expansion.  We failed.  See the above chart.  We are thus forced to lie (didn't you read it the first time?)


With substantial resource slack likely to continue to dampen cost pressures and with longer-term inflation expectations stable, the Committee expects that inflation will remain subdued for some time.


Gasoline is up 38% y/o/y, but this doesn't count as "inflation."  In point of fact, we do have deflation - and lots of it - since credit is the monetary base.  Oops.  (There's that damn chart up above again!)


The Committee will maintain the target range for the federal funds rate at 0 to 1/4 percent and continues to anticipate that economic conditions, including low rates of resource utilization, subdued inflation trends, and stable inflation expectations, are likely to warrant exceptionally low levels of the federal funds rate for an extended period.


I hear there is exceptionally strong support at zero.  For everything.


To provide support to mortgage lending and housing markets and to improve overall conditions in private credit markets, the Federal Reserve is in the process of purchasing $1.25 trillion of agency mortgage-backed securities and about $175 billion of agency debt.


We will keep illegally buying Fannie and Freddie paper.  We will also keep calling them "agencies" even though they are clearly not, as defined by The United States government itself.  Remember, we lie.


In order to promote a smooth transition in markets, the Committee is gradually slowing the pace of these purchases, and it anticipates that these transactions will be executed by the end of the first quarter of 2010. The Committee will continue to evaluate the timing and overall amounts of its purchases of securities in light of the evolving economic outlook and conditions in financial markets.


We're preparing to do this:

(That, by the way, is why there's an ammunition shortage!)

In light of ongoing improvements in the functioning of financial markets, the Committee and the Board of Governors anticipate that most of the Federal Reserve’s special liquidity facilities will expire on February 1, 2010, consistent with the Federal Reserve’s announcement of June 25, 2009. These facilities include the Asset-Backed Commercial Paper Money Market Mutual Fund Liquidity Facility, the Commercial Paper Funding Facility, the Primary Dealer Credit Facility, and the Term Securities Lending Facility. The Federal Reserve will also be working with its central bank counterparties to close its temporary liquidity swap arrangements by February 1. The Federal Reserve expects that amounts provided under the Term Auction Facility will continue to be scaled back in early 2010. The anticipated expiration dates for the Term Asset-Backed Securities Loan Facility remain set at June 30, 2010, for loans backed by new-issue commercial mortgage-backed securities and March 31, 2010, for loans backed by all other types of collateral. The Federal Reserve is prepared to modify these plans if necessary to support financial stability and economic growth.


All this crap failed to work - again, as I said before, the goal was to restart private credit expansion.  It didn't - it's still contracting.  Indeed, the really bad news is that even with all the government games total credit outstanding is contracting EVEN WITH government "borrow and spend" - an unprecedented problem.

At some point you have to give up.  That point is now.


Go long gasoline and matches for this feature presentation in The New Year: