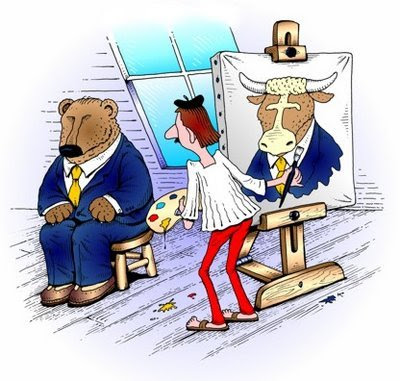 Bears getting painted into a corner? Let's do a channel check on what's happening to see if their argument holds any water.

How about the advice on the floor of the NYSE last Friday? "My research has come up with a great idea. We buy the big caps, and then short the small caps." Wow. That'll make you some money!

Wait--let's use a channel check to see where prices are going. CSCO has to raise its price for Tandberg? A few weeks back, they acted as though they would walk away. Let's check the housing channel check. Kim Kardashian is house hunting with Reggie Bush, and supposedly its a buyers market, but "no one is selling."  How about the precious metal channel check--and let's check real gold--not paper--and not tungsten. Oh wait. I covered that story already. let's do a channel check for platinum. Up $30. Wait--that must mean people are buying autos. It wasn't just cash-for-clunkers after all. Wait--lets do a channel check on GM--Oh my--they want to pay back the TARP? That isn't supposed to happen!

But since we're checking out California, maybe we should do a channel check with all the rocket scientists at PIMCO. The market was supposedly on sugar highs. No, it was a brick wall. No the train left the station and already arrived at the next destination. No wait--the economy can't hit the escape velocity! Isn't that what the pimps from PIMCO said? Did any of that make you any money?

But speaking of a locomotive--Check out Goldman's spin. They're still looking for an L with a tilt. In other words--slow growth also. Just throw in multiple expansion, and we'll be fine!

How about the "lack of revenue" growth? Remember how this was bandied about? Did any of that make you any money?

Has anything from any of these Wall Street pimps masquerading as rocket scientists--as anything that these bears said worked? Has anything come to fruition? How about this litany of items? That was given you a couple months ago?

How about all the ships hanging in the ports? How about China's vacant city Ordos? How about it? Did any of that make you money?

You might as well witness the bears Armageddon then at 1440!
Posted by Palmoni at 7:58 AM