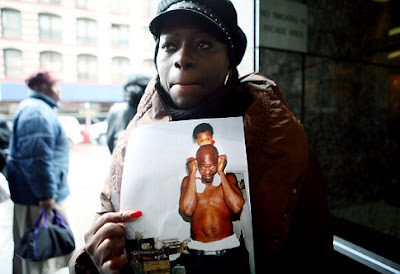 This happened last month, and predictably, it enraged people. Myra Purcell, lost her son in a murder case.
------
A Brooklyn killer escaped a possible life sentence Thursday after his victim's mother forgave him at the last minute for taking away her only child.

The murder case against Riccie Hanieph was minutes away from going to trial when Myra Purcell walked up to his lawyer outside court with words that astonished him.

"I forgive that boy. I just want him to go home," Purcell told the lawyer, Robert Kelly.

"I just want them to let him go home," Purcell told the Daily News as Kelly and prosecutors met to work out a deal in Brooklyn Supreme Court.

With tears in her eyes, the 48-year-old mom clutched a photo in one hand and a green-covered King James Bible in the other and gazed out a window.

"Jail is no place for that boy. His going to jail wouldn't help me. My son can't come back."

Purcell said her son was no saint. Both he and his killer had criminal records and were raised by single moms with absent fathers.

"Sheriff was a good boy. He had a good heart but he hated me because I couldn't spend time with him," she said. "He got caught up in the streets."

She said her son didn't deserve his violent end and she dismissed Hanieph's claim of self-defense.

"I know that boy doesn't feel anything," she said. "He thinks it's like a video game. But going to jail is not going to help him. I forgive him. Now it's up to God."
------
We heard a lot this week about bankers doing "God's work."

And it's not the piddly ante moralizing that the pundits are doing over the Bear Sterns acquittal.
Posted by Palmoni at 8:10 PM

Thanks for a great story. Maybe there is hope in the world...

Shes delusional and totally brainwashed by the religious types. Yeah, some non existant invisible deity will reward her for being forgiving to the killer that took away all her son would ever have. I'm sure her delusions extend to afterlife beliefs and she'll meet her child there. Lowlifes like that are incorrigable. They live to be criminals and will resume their ways at the first chance. I hope she feels all warm and fuzzy when the lowlife offs someone elses child.

OGO!
When I was busy buying krugerrands last year, I was expecting Blankfiend/Cashcarry/Bandit et al walking on the streets carrying placards " will work for food" but the great Lord has other designs and does not mind these sons of satan frolicking on His earth.
Sigh! Just thankful for your insightful blogs.