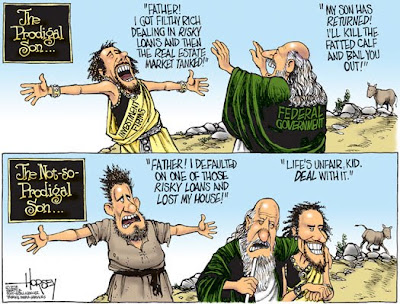 3-6 months to get a home mortgage modification--but not if you are underwater on a corporate loan! Then the banks move STAT!

Citigroup Inc., regional bank Whitney Holding Corp. and other lenders around the country are planning to review loans now considered nonperforming to determine if they can be reclassified under the guidelines announced Oct. 30 by bank, thrift and credit-union regulators, according to bank executives and people familiar with the matter. The moves could help the banks absorb fewer losses on troubled real-estate loans and preserve capital.

"It's a positive all the way around," said James Smith, chief credit officer for National Bank of South Carolina, a unit of Synovus Financial Corp.

Matthew Anderson, partner at research firm Foresight Analytics, estimates that about two-thirds of the $800 billion in commercial real-estate loans held by banks that will mature between now and 2014 are underwater, meaning the loan amount exceeds the value of the property. The flexibility extended by regulators will apply to $110 billion to $130 billion of loans, he said.

The guidelines are controversial, with critics accusing the U.S. government of prolonging the financial crisis by not forcing borrowers and lenders to confront inevitable problems.
Posted by Palmoni at 8:44 PM

They have become world renown for their man hunting and detective diablo 3 gold skills. The very name invokes a sense of wonder in listeners and sets cold the blood of criminals. Diabolo uses the latest new rim technology and therefore their wheels are lightweight and strong with fantastic driving diablo gold characteristics and excellent buy diablo 3 gold appearance. Although a little expensive, they provide longer assistance and less drag on the car Cheap Diablo 3 Items.