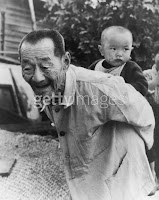 And unlike Goldman, they don't need an abacus to see Geithner's and Bernanke's bets!

Because now the trade has gotten too big!

Liu Mingkang, chairman of the China Banking Regulatory Commission, said that a weak U.S. dollar and low U.S. interest rates had led to "massive speculation" that was inflating asset bubbles around the world. It has created "unavoidable risks for the recovery of the global economy, especially emerging economies," Mr. Liu said. The situation is "seriously impacting global asset prices and encouraging speculation in stock and property markets."
Posted by Palmoni at 9:56 PM