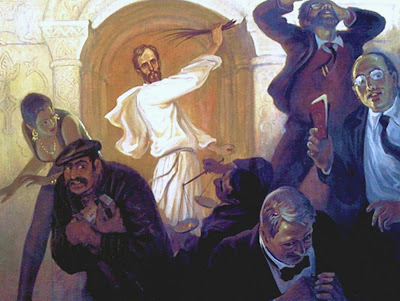 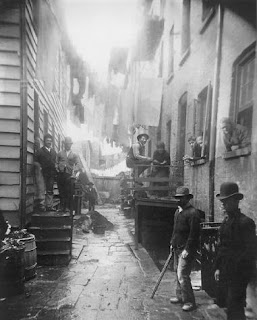 He had a photojournal essay entitled, "How the Other Half Lives: Studies of the Tenements of New York" with vivid pictures of the abject poverty and unsanitary conditions that people were living in.

He wanted the wealthy tenement owners to feel compassion, so they would take less profit and build better housing  for the poor.

Yesterday we saw that Goldman wanted to buy $1 billion of affordable tax credits from Fannie Mae.

Maybe Goldman thinks they are the next Jacob Riis. Because now they are doing the work of Jesus! 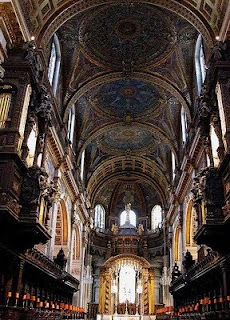 Remember him? Who said we have to tolerate the inequality? He also said the firm (GS) is doing the work of Jesus!

“The injunction of Jesus to love others as ourselves is an endorsement of self-interest,” Goldman’s Griffiths said Oct. 20, his voice echoing around the gold-mosaic walls of St. Paul’s Cathedral, whose 365-feet-high dome towers over the City, London’s financial district. “We have to tolerate the inequality as a way to achieving greater prosperity and opportunity for all.”

That's what he said two weeks ago in St. Paul's.

But Goldman had company with Timothy Geithner. He must of been hanging with the moneychangers and Jesus and Goldman at the temple. 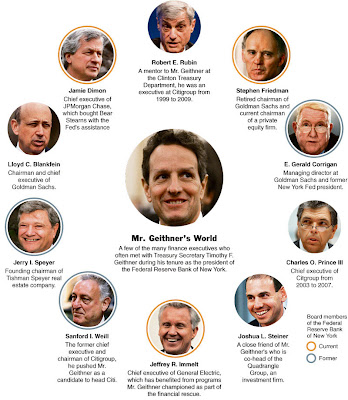 Look what he had to say in his boss Obama's hometown:

As U.S. Treasury Secretary Timothy Geithner looks back at the efforts made by government to treat the financial crisis, he says "the money spent was very limited."

The comment might seem startling given his emphasis repeatedly on the need to pull back the nation's deficit once the economy is less "fragile" than it now is. But as Geithner spoke with the Chicago Tribune's editorial board today, he said "I am deeply at peace with the necessity of what has been done" -- including the government's intervention in GM, investment banks, AIG and Fannie Mae and Freddie Mac. He emphasized that the money is getting repaid. 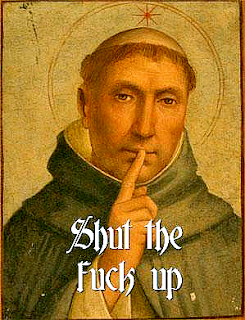 So Geithner is at peace! Isn't that a relief. The peace that passes understanding.

Because his banker friends have been saved!

And now they've been spotted in St. Paul's, quietly doing the Lord's work.

Now today we had Goldman's 10Q--and we found out that they weren't quite doing the work of Jesus.

But it was only on one day in the quarter! And two days last quarter.

But just one day! 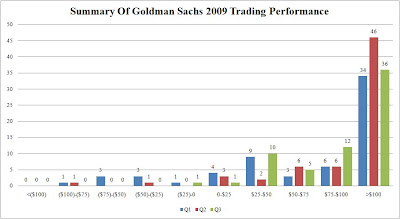 And what did Goldman do on the days it made money this year? 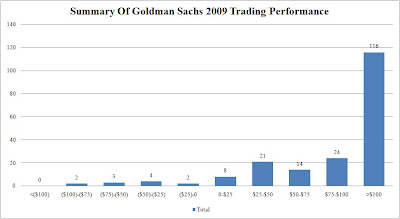 That's the work of Jesus on 85 and Broad.

Who needs Madoff or Galleon when you have Goldman!

I guess that's how the other half lives.

Jacob Riis inspired Jack London to write The People of the Abyss. It started like this:


Christ look upon us in this city,
And keep our sympathy and pity
Fresh, and our faces heavenward,
Lest we grow hard.

`You don't want to live down there!' everybody said, with disapprobation writ large upon their faces. `Why, it is said there places where a man's life isn't worth tu'pence.'

`The very places I wish to see,' I broke in.
-------
But Goldman knows how the other half lives. Remember when they puffed out their chest, and let the world know, that they would no longer provide bottled water for their workers?

Right now, the only bridge that Goldman can get stuck outside on is Hell Gate. 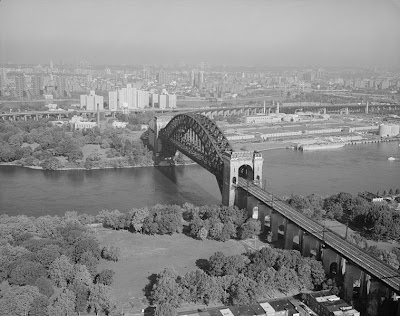 So luckily the saints from Goldman can now drink their bottled water.

Since they are doing the work of Jesus, they won't get stuck outside the gates of Hell!
Posted by Palmoni at 6:38 PM

What are the odds that Goldman made money almost every single day for the quarter? Even being "good" at what you are doing wouldn't net you these results...

Not being racist here, but I find it interesting that a 2% minority of this country's population happen to make up over 70%+ of all the banking positions... now that didn't happen by accident :P

Palmoni, I just want to thank you for your blog , advice, suggestions, touts, and being open to always respond to comments and questions.

i'm not an option trader nor a good trader in general but i've been able come back slowly on your touts the last few months. Although i've lost 30% (nothing to do with you) over the past week , i'm glad you have this blog to post "bull" buys and just stocks.

I read the shit you write about us, but you don't know Wall Street.

You touch us, you touch God.

Tonight, we told the world to sell.

Who do you think sold today?

Hey thanks--I hope that you can make up those losses.

I hope i can make up those losses too.

just wanted to say great call on GRMN...you told guys to sell after GS put it on conviction buy...

who was that just just commented at 7:22? you think someone really from GS?

Strange post--Goldman put out some macro calls tonight but I won't have that in the morning.

I think it was about gold as a play on the decline of America and the stock market being overpriced.

But someone had the heads up on Goldman's call if that was the case--I was working out in the gym and I saw some headlines flash on CNBC.

CNBC posted on this blog asking me to be on their show, and at first I didn't think it was them, until I called them so who knows.

I think CNBC jumped the gun.

Goldman did say stocks were overpriced, and that gold was representative of the decline in America, but it was David Goldman, not Goldman Sachs.

Does mobile hang due Get APK to heavy information and also hundreds of Chat messages in Whatsapp APK Now Buddies, do not worry, Now I will certainly educate you ways to APK Updated Use Whatsapp Messenger.