Goldman skips out on kitten vet bill, then pays it after newspaper reports it

Let us apologize for Goldman Sachs

Since Goldman Sachs has been a big part of the Lower Manhattan fabric for almost a century and a half, we’d like to take this opportunity to apologize to the rest of the country on behalf of our neighbor, a financial giant personifying much of what is wrong on Wall St.

Before we get to the multibillion-dollar stuff, we’d first like to apologize that the firm has not yet paid a few thousand dollars of vet bills for the five kittens born in its headquarters building nearing completion in Battery Park City. In August, after our sister publication Downtown Express reported the kittens’ discovery, Goldman offered to pay the bills and encourage its employees to adopt the “BlackBerries.”

It may be just a matter of Goldman waiting to get the vet invoices — we can’t imagine they’d stiff kittens while writing out bonus checks worth $23 billion — but the cats still need adoptive homes. (Incidentally, anyone interested in one of these adorable kittens should e-mail their rescuer, the Brotmans, at rbrotpaw@aol.com.) 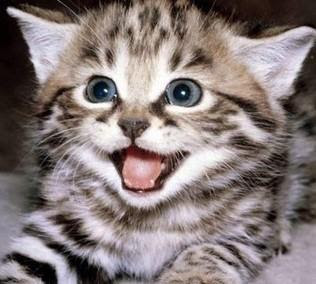 Now after this public flogging and shaming, Goldman announced they did pay the kitten's vet bills, and a spokesman for Goldman said, "They are now the luckiest kittens in Manhattan"
Posted by Palmoni at 5:17 PM

Did the kittens get a bonus?

They got to lick Goldman's gold.