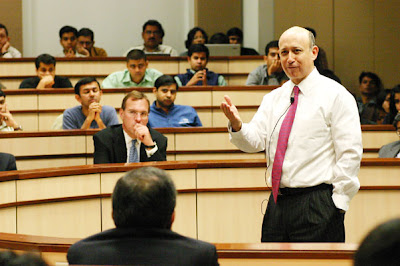 Boy I'm glad that was clarified! 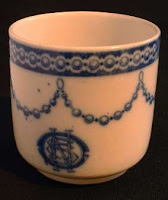 Earlier this week, Goldman declared they  were doing the work of Jesus. I know that piece put off some folk--Did the people at the cult of Goldman really believe that?

So their CEO, Lloyd Blankfein had to clear up that misunderstanding because they didn't want to drink from that cup--and you can't make this stuff up.

He starts with a little humility. (That's easy after paying himself $68 million last year!) He understands that "people are pissed off, mad, and bent out of shape" at bankers’ actions. Goldman played its part in the meltdown that almost destroyed the global financial system. It, like most other banks, lent too much money, made its first quarterly loss for more than a decade last year and ended up taking bail-out cash from Washington. "I know I could slit my wrists and people would cheer," he says. But then, he slowly begins to argue the case for modern banking. "We’re very important," he says, abandoning self-flagellation. "We help companies to grow by helping them to raise capital. Companies that grow create wealth. This, in turn, allows people to have jobs that create more growth and more wealth. It’s a virtuous cycle." To drive home his point, he makes a remarkably bold claim. "We have a social purpose."

How did Lloyd instill that social purpose in his wife? Does anybody remember how that turned out? Remember Laura Blankfein at the Hamptons?

“Their behavior was obnoxious. They were screaming,” said one witness. Blankfein said she wouldn’t wait with “people who spend less money than me.”

Ahh..but Lloyd says its not about making money. (I guess he forgot to tell his wife, that she can only engage in competitive grooming)---In fact--it's about---drumroll please.......

He is, he says, just a banker "doing God’s work"

The LORD works in mysterious ways. So now we can take Goldman off the cross! Now we are doing God's work!

But isn't it about the money? I know that Blankein says he has "already attained perfection" so I suppose he can speak for God.

But isn't this also true: 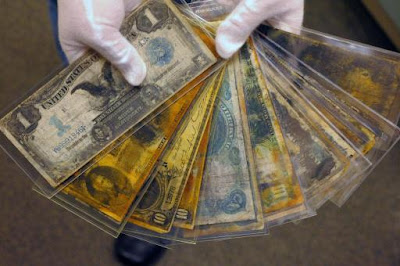 There’s so much of the stuff sloshing around that in an average year a good investment banking partner will make $3.5m, a good trading partner $7-10m and a management committee member $15-25m. Some 953 employees got bonuses of at least $1m in 2008. Blankfein may insist he is still a blue-collar guy, but he manages to have a $30m apartment on Central Park West and a 6,500-square-foot home in the Hamptons, the summer playground of New York’s elite. One former Goldman banker describes the culture as "completely money-obsessed. I was like a donkey driven forward by the biggest, juiciest carrot I could imagine. Money is the way you define your success. There’s always room — need — for more. If you are not getting a bigger house or a bigger boat, you’re falling behind. It’s an addiction." Addiction is a word Sherwood uses, too. He should know. He’s on his second multi-million-pound super-yacht. "I like boats," he says. Not sailing, but boats. It’s his way of keeping up with, and in with, his friend the BHS billionaire, Sir Philip Green, who lives for part of the year on his 208ft, £32m yacht, Lionheart, which is moored in Monaco. "How many boats have I bought?" Sherwood says. "It’s not a good time to answer that. I’ll take the Fifth." 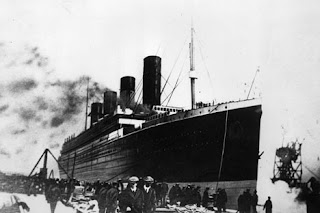 Why is why Blankfein says this:

We should welcome the return of titanic paydays at Goldman.

After all this is Goldman:

Their assets total $1 trillion, their annual revenues run into the tens of billions, and their profits are in the billions, which they distribute liberally among themselves. Average pay this recessionary year for the 30,000 staff is expected to be a record $700,000. Top earners will get tens of millions, several hundred thousand times more than a cleaner at the firm. When they have finished getting "filthy rich by 40", as the company saying goes, these alpha dogs don’t put their feet up. They parachute into some of the most senior political posts in the US and beyond, prompting accusations that they "rule the world". Number 85 Broad Street is the home of Goldman Sachs.

And here is some more prose from Goldman:

"We didn’t f*** up like the other guys. We’ve still got a balance sheet. So, now we’ve got a bigger and richer pot to piss in," is how one Goldman banker puts it.

And even Blankfein, Mr. Humility, loves telling his lies, while doing the work of God: 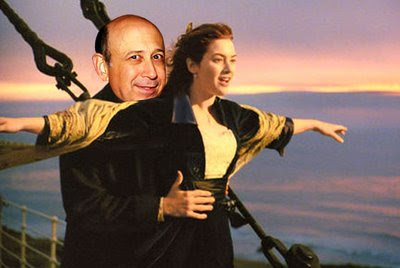 Blankfein dismisses any suggestion that Gold-man needed to be bailed out, and, by extension, rejects any notion that the firm is now profiting from public support. Sure, he took $10 billion from Washington’s Troubled Asset Relief Program (Tarp). But the bank has since repaid the cash, with healthy interest — 23%. Goldman also bene-fited from the federal bail-out of the huge US insurance firm AIG. Goldman had bought $20 billion worth of insurance from AIG and received billions of dollars — perhaps as much as $13 billion — when Washington pumped $90 billion into the stricken giant. But Blankfein insists Goldman was "hedged" against any AIG losses, in the best possible way — with cash. So even if AIG had gone under, Goldman would not have suffered. Critics say that had AIG gone bust, the entire financial system could have collapsed, taking Goldman with it. What’s more, at the height of the crisis, the Federal Reserve broke with an 80-year-old tradition and let Goldman turn itself from a pure investment bank into a bank holding company. This meant it could borrow funds at the same cheap rate as commercial banks for as long as it wanted. Blankfein says Goldman changed status not for the money, but because it had become clear, following the collapse of Bear Stearns and Lehman, that the market had lost faith in the ability of the US Securities and Exchange Commission to regulate investment banks. Being regulated by the central bank, the Federal Reserve, would help to restore confidence in the financial system as a whole.

Oh--so that was their social conscience. It wasn't the billions that it would make Goldman! They took the $5 billion from Buffett, the $10 billion from TARP, the $13 billion from AIG, and billions more on guarantees from Treasury, funded with cheap loans from the taxpayer--not because they needed it, but to "restore confidence!"

Well give it back then. If the system has confidence---give it back. Does their "social consciense" extend that far?

And then, they took your money, and gamed the system with winks from the Government!

Remember when bear Stearns went down? How about when Henry Paulson was in Russia. And they had a social meeting with Goldman Sachs. Did you get that? A social meeting. Just so you  better understand Goldman's definition of a social consciense. 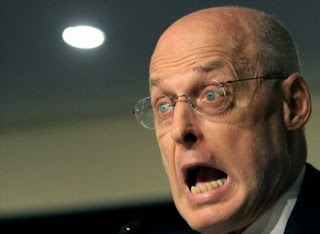 Blankfein’s predecessor, Paulson, had promised not to talk to Goldman when he moved from the bank to the US treasury, but last June he happened to be in Moscow at the same time that Goldman’s board of directors was having dinner there with Mikhail Gorbachev. Paulson got approval from treasury lawyers to meet his old chums, since it would be a "social event". Paulson proceeded to regale them with stories about his time in the treasury and his predictions for the global economy. Goldman’s board questioned him about the possibility of another bank blowing up, like Bear Stearns. Recently released documents reveal that a few months later, at the height of the crisis when Paulson was working on the bail-out of AIG, Blankfein’s name appeared on his call sheet 24 times in six days. Big banks that held AIG insurance contracts, including Goldman, were paid off in full, rather than at the 60 cents on the dollar that AIG negotiators had been pressing for, prompting allegations of a "sweetheart deal" between Paulson and Blankfein.

Goldman vigorously denies that having so many former staffers in top political posts means it receives special treatment. "These people are highly principled," says Sherwood. The Moscow meeting and the AIG deal call into question Sherwood’s claim, to put it mildly.

Is it any wonder SNL even skewers Goldman?

Maybe they better be careful. Goldman's doing God's work! And let those in Government kiss their ass. 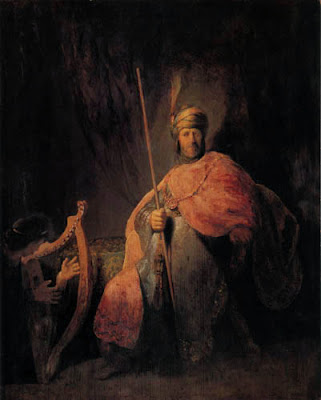 I Samuel 26:9
“Do not destroy him; for who can stretch out his hand against the Lord's anointed, and be guiltless?

Even though, the people would all like to see this! 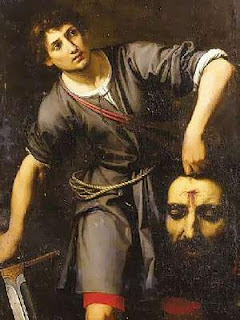 Maybe there isn't anybody with the balls to take on Goldman. And to take on that club.

Goldman needs their titanic paychecks for the greater good of this country.

I just don't buy that.

Someone will take them on.

As long as they keep propping up the markets, then they are doing God's work :P

Your posts are too long, too conspiracy ladened, and too one-sided.

Maybe Goldman's pipeline to God explains their success--I'm sorry I didn't understand that!

Every time I look at you in disgust I don't understand
Why we let Wall Street just get so out of hand.
You could'nt have managed better if you'd had it planned.
Why'd you choose to sink AIG in derivative quick sand?
If you'd come today you would be lynched by a whole nation.
The result of your insatiable greed would be mass extermination.
Don't you get me wrong.
I only want to know.

Goldman Sachs, Goldman Sachs,
Who are you? What have you sacrificed?
Goldman Sachs Bailout Super Stars,
Do you really believe you're what you say you are?

Tell me what you think about your former friends at the top.
Who'd you think besides yourselves's the pick of the subprime crop?
Lehman, was that where it was at? They are not where you are now?
Could Bear have found use for Bernanke's magic mountain, or was that just bad PR?
Did you mean to go like that? Was it a mistake, or
Certainly you know your messy death would have been a record Wall Street breaker?
Don't you get me wrong.
I only want to know.

Yоu're so cool! I do not believe I have read something like that before. So wonderful to find somebody with some genuine thoughts on this issue. Seriously.. thank you for starting this up. This web site is one thing that is needed on the web, someone with a little originality!

Have a look at my homepage: green coffee bean extract ()