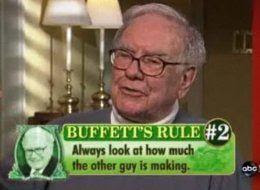 Last weekend, Buffett said Blankfein of Goldman Sachs had his 100% support; and that if he had a twin, he would hire him.

He also said he didn't care  who was on the other side of the Abacus deal.

Really? That wasn't one of his rules?

Fortune speculated differently on Blankfein:
Last weekend, Buffett said that if we bailed out GM, we'll bail out the states also.

"I personally think it would be very hard, in the end, for the federal government to turn away a state that is having extreme financial difficulties when in effect it honored General Motors  and various other entities," he said.

Buffett did fret about potential "contagion" in municipal defaults, where a default by one entity could lead to defaults by others.
Didn't Buffett guarantee billions and billions in municipal debt?

And now Buffett is fretting about municipal contagion?

He used to love contagion!

Then, as if asking a friend to spend an afternoon hunting golf balls, Buffett suggested that Monen drive around the state looking for stock. Sucked in by the Buffett contagion, Monen took off in  a red-and-white Chevrolet for the far corners of Nebraska, waving $100 a share at anyone he saw in a rural courthouse, banks, an dth elike. "It sounds corny," Monen said later, reflecting on his willingness to go. "Warren Buffett is as near to Mr. Perfect as anyone I know." Mr. Perfect and his partner captured 10 percent of the stock and made more than $100,000-Buffett's first big strike."

How about sovereign contagion?

A year ago, Buffett said the economic recovery would be very slow. Now he says its going great guns.

Let's get some sovereign contagion, and then lets see what he says.

Especially if he has to make good on some of his derivative bets!
Posted by Palmoni at 8:52 AM

Run for the hills!

The two faced nature of Buffy is legend.

Way back in '95, I remember reading an article about buffy in the now defunct publication worth.

It was an eye opener. Buffy is one hard nosed, two face operator.
Sure, buffy always says he loves current mgt, but have a bad couple quarters and you're out mr ceo.

There were numerous examples of buffys two faced nature. He often bad mouthed financial instruments only to get into them himself a year or two later.
He talks about giving the buyout offer to shareholders but when he was making the offer, he just wanted to go to the ceo. He himself was glad to bypass those meddlesome shareholders.

The guy is very much a say one thing and do the opposite.

CNO on the go

time to get back in?

anyone know anything about CRXX?

Palmoni,
would you buy GS right now at $150? or do you think they will drop more?

I don't like Goldman, but if you like it so much, look at the puts. They have a big premium, and if you're comfortable owning the stock, why not just collect the premium on the out of the money puts?

I just think Goldman is an overpriced hedge fund, pretending it is an investment bank, and there are better places than that name

Yeh it is brutal and what happens when the bears get emboldened and they try starting a "run" again?

I made some sales last week, and the HFT traders, instead of taking all the shares I sold at .001 above the bid, they only took partials

the HFT exaggerated the upside, and now they magnify the downside

How much "real" buying is out there?

But Palmoni, isn't this sell-off just one of those "punish the authorities about their behaviour" (GS crackdown) events that you've often described?

It still looks that way--look at BUCY today--that tells you a lot of this is still orchestrated by the shorts that have been emboldened. That had a vicious rally back.

I'm just hoping (I suppose along with everyone else) that it pulls in some more.

It's just easier making money in a panicky market than in one that has no volatility and just moves up--and moves up incrementally.

But there are so many stocks that these guys are falling all over themselves to buy now that they have had these massive moves.

And Meredith Whitney finallygot some courage again, and showed her mug on CNBC. Ms. Piggy has been very good at identified the tail end of the correction.