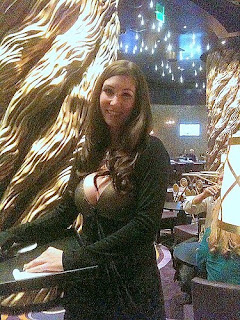 ZH
The ratings agencies like Moodys and Standard and Poors are the pretty cocktail waitresses that lure the mark (the retail investor) into the Casino (stock markets) with free alcoholic drinks (abominably horrible and deceitful credit ratings of financial instruments) to instill the mark with the false sense of confidence necessary to induce gambling in the rigged Casino. The regulators like the CFTC and the SEC are the pit bosses that oversee the floormen (Wall Street firm CEOs) that oversee the table games dealers (the firm’s traders) and ensure the games (stock markets, currency markets, commodity markets) you are allowed to play possess a feature (HFT trading programs) that ensures that the odds will always enormously be in favor of the house. The pit boss oversees all floor dealers and conspire with the regulators (the cocktail waitresses) to give gamblers (the investor) a sense that all dealings are legitimate even though the odds of every table game (currency markets, commodity markets, stock markets) are insanely rigged in favor of the house (Wall Street firms). If we consider the table game of blackjack, in a real casino, should you receive a good hand, the dealer will pay out your bet. In the case of Wall Street, due to HFT programs, in many instances, should an investor receive a favorable hand (i.e., a favorable move in the stock market) in the game he or she is playing, HFT programs move in to prevent the bet from paying out in full or paying out at all (an investor’s sell order never executes at the price at which the market has informed the investor that he or she can cash out). 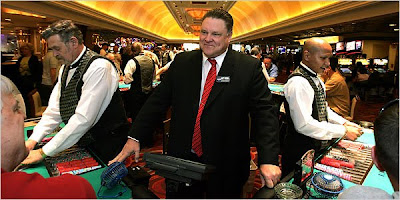 In essence, financial markets are rigged exactly like casinos except for one difference. The predatory algorithms executed by HFT programs ensure the winnings of the house to a much greater extent than any Casino table game is able to accomplish. It this sense, Wall Street is rigged to a greater extent than even casinos. In the instances when you win, they deploy HFT trading programs that prevent the bet from paying out full value so that the house (Wall Street firms) can step in and earn profits from a trade it spots AFTER an order has already been placed. Or in the mirror example, HFT programs allow the house (Wall Street firms) to step in front of trades they “see” and front run them for their own profits, again screwing the retail investor out of a lower price in a buy transaction. In these cases, which must happen by the thousands every day, the HFT programs employed by Wall Street screw both the buyer and seller in the transaction as it always attempts to widen the losses or lessen the gains of both parties involved. In some instances, frustrated traders leave the game tables so liquidity dries up which leads to the establishment of even more grossly distorted and unfair bid and ask prices. Despite this practice being commonplace, the pit bosses of the giant rigged Wall Street casino, men like Goldman Sachs’s Lloyd Blankfein, want us to believe that their enormous profits are derived because of their upstanding integrity and above-average intelligence of his firm’s employees. 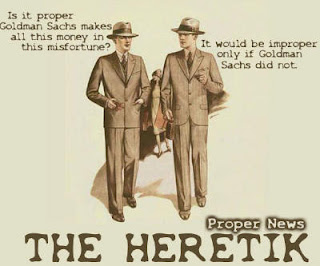 And how about the trades that were "canceled" in Thursday's route? How about Accenture? How about the poor sap that bought the stock at 32 and then at 5.84 when it cratered, only to watch it fall to a penny, and then, when it rebounded he sold it at 30, only to have his buy at 5.84  cancelled, and his sale at 30 stand, and now the stock closes at 41 and now his 25 points on his sale at 30 gets taken away, and he's upside down on a short, when he should have booked major coin!

Only on Wall Street, can they cancel a "trade" and then "cancel" only one side of it! Oh that's right. O forgot. Wall Street was on the other side! 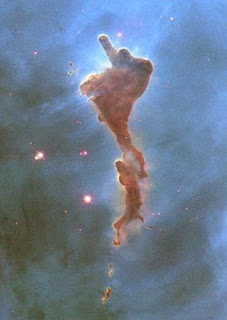 Wall Street, of course, can't put their finger on the problem: (Only after lying to us and saying it was a "fat finger" problem--now they can't find the finger!)

NYT
A day after a harrowing plunge in the stock market, federal regulators were still unable on Friday to answer the one question on every investor’s mind: What caused that near panic on Wall Street?

Through the day and into the evening, officials from the Securities and Exchange Commission and other federal agencies hunted for clues amid a tangle of electronic trading records from the nation’s increasingly high-tech exchanges.

But, maddeningly, the cause or causes of the market’s wild swing remained elusive, leaving what amounts to a $1 trillion question mark hanging over the world’s largest, and most celebrated, stock market. 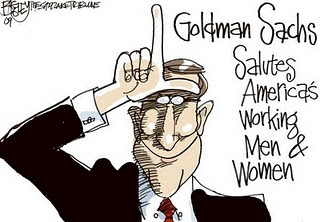 Look to your friendly SLP, (Supplementary Liquidity Provider) Goldman Sachs, decided to supplement their pockets with your money!

But wait--Didn't Goldman have a 22 page talking point memo, outlining how their "liquidity" was making the market more efficient, while taking costs down?

Now did anybody really believe this?
Goldman Sachs Market Structure
Posted by Palmoni at 10:39 AM

Paid directories are numerous, and include: Gimpsy, Joe - Ant and Go - Guides.
Remember that SEO is constantly changing, and will continue to evolve
into the foreseeable future. But one important thing Yoga studios need to consider is their SEO or search engine optimization.

The food is absolutely amazing. I have yet to find something I don't like. The duck tacos are to die for! The bartender in the poker is on point with service and amazing cocktails! And the Poker room got the more fun!!!!! onlineblackjackexperts.net…

Whatever you have provided for us in these posts really appreciative.gokken

My friend and I went out to celebrate a new job the other night, and we had the best experience. We've been going to Stones every once in a while, and the food and drinks are always amazing...But honestly, the service was some of the best we'd ever gotten at sicboonline.net.

In its most basic description a strategy in this context, is an outline of all the possible hands that you can hold in the game.

You create sense out of the foremost complex topics.
https://casinoonlinevenezuela.co.ve/

Shared! Shared! This is AWESOME stuff man! Thank you!
gambling

I see the greatest contents on your blog and I extremely love reading them.
ONLINE SLOTS

This post is really valuable that designed for the new visitors. Pleasing work, keep on writing.
Mobile Casino Apps

That’s really amazing and extraordinary blogs & can help those who get issues in searching this type of information.
www.ruffhero.com

Pretty! It was really a wonderful blog. Thanks for the provided information.
Leonel Stuart

Your composing is purely awe-inspiring that I desired to read such high quality material...
great online casino sites

Your articles and blogs are inspirational.
top web design firm

The stuff in this blog is in not only incredible but also providing the great knowledge to the people.
try here

Hey buddies, such a marvelous blog you have made I’m surprised to read such informative stuf
brand marketing firm

The quality of your articles and contents is great.
casino utan svensk licens