Cenus workers can enter any room in your house 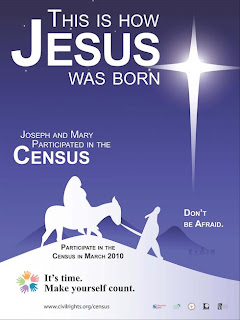 Even if its a manger.

What many Americans don’t realize, is that census workers — from the head of the Bureau and the Secretary of Commerce (its parent agency) down to the lowliest and newest Census employee — are empowered under federal law to actually demand access to any apartment or any other type of home or room that is rented out, in order to count persons in the abode and for “the collection of statistics.” If the landlord of such apartment or other leased premises refuses to grant the government worker access to your living quarters, whether you are present or not, the landlord can be fined $500.00.

That’s right — not only can citizens be fined if they fail to answer the increasingly intrusive questions asked of them by the federal government under the guise of simply counting the number of people in the country; but a landlord must give them access to your apartment whether you’re there or not, in order to gather whatever “statistics” the law permits.

A New York financial adviser to celebrities was arrested and charged with running a $30 million fraud scheme that allegedly involved using clients' money to buy himself a lavish Manhattan apartment and enrich friends, including a former New York City politician.


Mr. Starr, 66, was found hiding in a closet by federal agents at his Upper East Side apartment on Thursday morning, prosecutors said.
Posted by Palmoni at 9:09 AM

Hey ! Genuinely it’s really possible to earn money online; I really felt that this website is quite impressive and a great idea to earn hundred’s of Dollars daily.