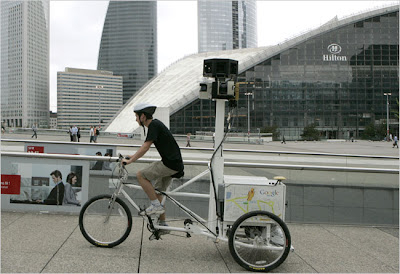 Google said that it had "inadvertently" collected the WiFi data, but now it won't turn over the inadvertent data that they collected.

As though Google ever does any thing inadvertently!

BERLIN — Google has balked at requests from regulators to surrender Internet data and e-mails it collected from unsecured home wireless networks, saying it needed time to resolve legal issues.

In Germany, Google said it was not able to comply with the Hamburg data protection supervisor’s Thursday deadline to hand over data the company had collected — inadvertently, it says — while roving cars were compiling its Street View photo map archive.
Posted by Palmoni at 9:10 AM

Palomoni, what do u know about this Paul B Farrell of market watch? who says yesterday--
"Your safe haven must be self-sufficient and capable of growing some kind of food ... It should be well-stocked with seed, fertilizer, canned food, wine, medicine, clothes, etc. Think Swiss Family Robinson."

I never read him before, he promotes having a "lazy portfolio" but says America will be destroyed so get out of stocks now--

Palmoni are we in a Bull trap?

Settembrini - Farrell rolls in the lines of Gerald Celente. that day can and will happen but i think more so after 3 1/2 years after the peace treaty is signed

Sett: anon has the goods on Farrell

This time I don't think you can fade the rally