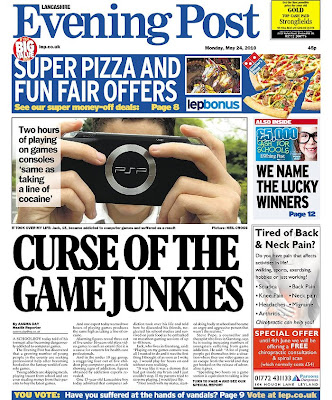 We hear that greed caused the meltdown, and that making money is as addictive and destructive as cocaine.

An example cited in his book involves a successful hedge-fund manager responsible for a $300 million fund who is constantly looking for new investments. Gawande's discussion with the fund manager is about how to avoid making bad investment decisions. Turns out, in addition to being smart and having loads of financial information, it takes extreme discipline. That's because of something called "cocaine brain."


Researchers have discovered that making money, such as is done by investors, stimulates the same part of the brain that using cocaine stimulates. The more you have, the more you want until it kills you, or you learn to control it. The hedge-fund manager points out that many big investors get into trouble because of "cocaine brain."


Now think about what happened on Wall Street. People with huge amounts of money couldn't stop trying to get more. Despite being smart, they lost their ability to make sound judgments, just like cocaine users. In Gawande's example, the investor has figured out a way to avoid the "cocaine brain" syndrome by religiously sticking to an investment decision checklist he has developed.

On fact, this story was picked up by MSM:

So now add videogames to your cocaine checklist!

But somehow, that doesn't have the same story line unless it's coke and Wall Street!
Posted by Palmoni at 9:12 PM

so hows bull working out for you? Bulls were ready to goar bears? o yeah, buy FAS!