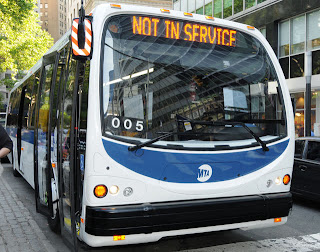 A bizarre policy has allowed city bus drivers to land an average of two months paid time off -- with one staying at home for more than half a year -- every time a rider spits on them.

The outrageous arrangement comes courtesy of TWU Local 100's strong union contract and the willingness of MTA officials to categorize spitting incidents as "assaults" -- even though the state penal code doesn't.

Of the 153 bus drivers who took time off because of assaults last year, 51 -- one-third -- did so solely because a disgusting rider decided to spew his frustrations, MTA officials said at a committee hearing yesterday.

And they averaged a whopping 64 days of paid time off for each incident, the officials said.
Posted by Palmoni at 8:28 AM

well, it looks palmoni isnt as agressive as in the past, when he was on right side.
i only have to repeat you:

anon, give us a trade to take right now. will the market go further south? Tell what what to short and where. Is this the last down day? Tell me what to buy and where? Otherwise shut your cunt hole. It stinks.


me thinks you haven't always posted as anon.

this guy is a permabull with a selective memory just like all so called gurus.

he says he told people to buy at the march lows.

sure, but he also ranted bullish every month before that.

This guy takes care of himself with pumps but I'm sure he dumps the moment the stock goes lower for himself. hes not going to tell you.

Palmoni is a permabull who says in hindsight that he called for corrections when in fact he did not.

Palmoni - what's your permabull call this time? I'm sure you're just buying this dip like a kid in a candy store. Let's hear you put your money where your mouth is.

this permabull couldn't possibly follow his own posted buys.

he would have been wiped out or near wiped out by the fall of 2008.

You notice now the postings have a sudden addition of " tight stops ".

Well with tight stops, how do you know whats a blip down vs a real downtrend starting??

tight stops is a great trading strategy to go broke. you're always buying up and selling after a drop. market fluctuations will decimate you.

he has to be long the stock or out or short. this wishy washy tight stops thing is of no use advertise.

I'd say 1440 by July or August then. Nobody's perfect on timing. If you guys think TPTB will let this market stay down for long, you need help. Crash? Maybe, but followed by the biggest rally you've ever seen!

When trolls start to show up, we are close to a ST bottom.

My 1040 was tagged. I'm slowly adding longs, contrary to what Hussman says.

palmoni did make some good calls and i made money on MGM and V quick followed his calls. no one can be 100% correct. mean spirit does not help in difficult times.