"Even Greek journalists were on strike, but they later went back to work in order to cover the riots." 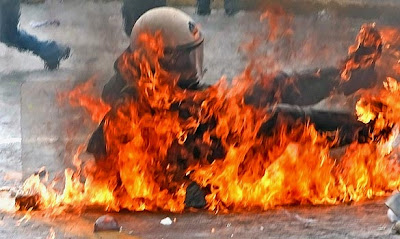 ATHENS (MNI) - A building belonging to Greece's Finance Ministry was set afire Wednesday by rioters protesting the stringent four-year austerity plan the Greek government has agreed to accept in exchange for up to E110 billion in aid from fellow Eurozone countries and the International Monetary Fund.

The Finance Ministry issued a statement Wednesday night saying that no crucial documents had been lost, though the damage to the building was extensive. 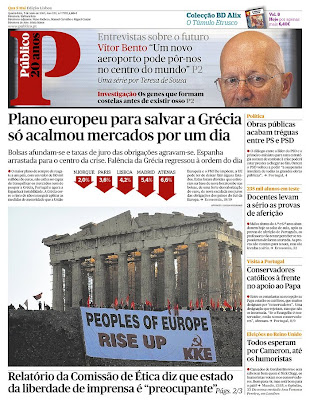 Check out Portugal's front page. Does anybody think they are next?

And check out Bill Gross. Does anybody think that Spain will soon follow?

Still, as future bond issuers belly up to the bar with their rating agency seals of approval, it is incumbent on the buying public to treat those IDs with a healthy skepticism. Firms such as PIMCO with large credit staffs of their own can bypass, anticipate and front run all three, benefiting from their timidity and lack of common sense. Take these recent examples for instance: S&P just this past week downgraded Spain “one notch” to AA from AA+, cautioning that they could face another downgrade if they weren’t careful. Oooh – so tough! And believe it or not, Moody’s and Fitch still have them as AAAs. Here’s a country with 20% unemployment, a recent current account deficit of 10%, that has defaulted 13 times in the past two centuries, whose bonds are already trading at Baa levels, and whose fate is increasingly dependent on the kindness of the EU and IMF to bail them out. Some AAA!

You also had this from PIMCO:

"Tramp stamp and hooker heels do not begin to describe the sordid, nonsensical role that the rating services performed in perpetrating and perpetuating the subprime craze, as well as reflecting the general deterioration of investment common sense during the past several decades. Their warnings were more than tardy when it came to the Enrons and the Worldcoms of ten years past, and most recently their blind faith in sovereign solvency has led to egregious excess in Greece and their southern neighbors." 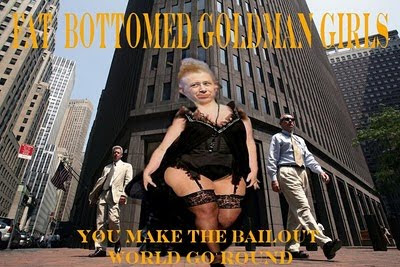 Which led to this by williambanzai!
Posted by Palmoni at 10:52 PM

It's remarkable to pay a quick visit this website and reading the views of
all colleagues concerning this article, while
I am also keen of getting knowledge.