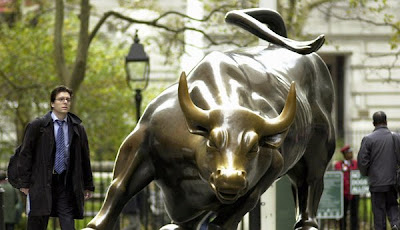 theOnion
WASHINGTON—Securities and Exchange Commission officials are calling it the strictest regulatory reform since the Great Depression: CEOs of major financial institutions will now be required to humbly shrug and smile sheepishly before accepting huge salary bonuses.

The new regulation, SEC rule 206(b)-7, will reportedly target Wall Street executives who accept disgustingly bloated annual payouts, forcing them to raise and then lower their shoulders in a manner that conveys a mild degree of humility or a sense of "Aw, shucks. Who? Me?"

"This sweeping new reform sends a clear message to fat-cat CEOs at firms like Goldman Sachs and AIG," SEC chair Mary Schapiro said Monday. "Never again will they be able to receive massive bonuses unless, at a minimum, they flash a gee-I-don't-think-I-should expression and say something like 'Well, all right, but only if you insist' first."

"Mark my words," she continued, "The days of greedy, out-of-touch executives pocketing outrageous $40 million bonuses without acting slightly embarrassed about it are over."

I suppose you didn't think they would attack high frequency trading would you? Where they give those players all your trading intentions!

Should we sell everything now?

I'm cleaning out my portfolio on these rally's .....no sense giving these bastards another penny ....keeping gold ....I'm done

Still a lot of money to be made in gold specs

"sell everything"
Maybe in another day, when the stocks that broke have revisited their old highs--well then, that will give you a chance for a trade if you want to play the short side.

But the ideas that we will just roll over here--I don't buy into that.

When we break and bounce, everyone wants to get out the first couple of days --and we had that---and stocks don't make their moves until days later.

The stocks that were shorted are the ones rallying the most--but it takes more than a few days to get those guys to cover.

I'm only looking at those that are really extended, otherwise there is too much easy money to be made than just hacking against the hapless shorts who are getting squeezed

How come the high flyers are still high flying?

yesterday I said this:

"let them come up to their previous highs

If their previous tops aren't a lid, then you don't short them. Look at BIDU it broke through it's top, and now you can't short it

shorting high fliers is a dangerous game. I advocated selling them when they revisited their highs--but that's because I like lower priced stocks that can have a greater percentage move

Goldman Sachs advisor and hermaphrodite Elana Kagan(Ana Pauker)SC nominee says: "I take it as a given that we live in a society marred by racial and gender inequality, that certain forms of speech perpetuate and promote this inequality, and that the uncoerced disappearance of such speech would be cause for great elation."
Sweet

Another case of beaurcratic appointments of incompetence. Did she even ever argue a trial case?

What do you think of MGOL's drop today?

i'm a bit confused...do you know why we're climbing so high today...hope it's not a set up for us longs

Are we done rallying?

What you got, up or down from here?

the highfliers look like they had exhaustion gaps today

Is Minatura Gold MGOL a buy?

Everything red but the dollar! Unbelievable.

MGOL? I think its the cheapest gold play on the market.

I think you'll make 100X your money on this stock in the next five years.

However, the story is too complicated for the average investor, who has an attention span less than two minutes. You need to do your homework to understand what the stock has.

As an example, just the other day they finally updated their website.

You have the public company, MGOL which has 21 properties in in, and close to 100,000 acres of concession, but you have another million acres in the holding company.

Check out how this works.

On page 18 of that presentation you will see that Yamana Gold is exploring an area right next to their concessions. Obviously I believe there were discussions, and I believe MGOL rebuffed their overtures.

So what did AUY do? Well go to www.sedar.com click on AUY

Read the January 7, 2010 25 page press release, and on page 12, you will see that AUY has a project in Anori. So why now is AUY interested in more area around Anori?

Maybe they are finding gold?

What would you do, if you were AUY, and you found gold, and you inquired about MGOL's concessions in Anori, and let's say you were rebuffed. Wouldn't you then, see if you get get any more land around there?

So what did AUY do? Check this out. They picked up a concession, from another company and quite frankly, who cares about the one they picked up. From what I know, they didn't get the good stuff, but then, I have older mining data, that still needs to be proved out with modern methods, so take it just as an opinion, until the assaying gets done. We'll see.

So AUY, gets a concession from Colombian mines on May 10. May 9, was when all the license fees had to be paid on concessions, so it looks like let's cut a deal, and take whatever AUY is offering. Heck, AUY wasn't getting concessions in Colombia in 2001 or 2002 or 2003 when you get get killed in the jungle,like MGOL was so they do whatever any big mining company does. They try an exploit a weaker company.

Now, remember the presentation, where is showed that MGOL had 1527 acres in Aniri?

ANORÍ, ANTIOQUIA, Colombia--(BUSINESS WIRE)--MGOL (OTCBB:MGOL - News) (“MGOL”) announces the formation of a new joint venture into which MGOL and its joint venture partners have contributed 17,736 acres of mining contracts and mining claims near the town of Anorí in the Department of Antioquia, Colombia (the “Anorí Project”).

The Anorí Project is located approximately 175 km northeast of Medellín. The property sits immediately adjacent to a number of local artisanal gold mines with historical mineral showings. MGOL has identified five areas of anomalous gold mineralization on the property and recently compiled available geotechnical data on 1:20,000 scale maps, utilizing ARC-GIS software. Previous surface samples surrounding the town of Anorí returned gold assays ranging up to 112.45 g/t (grams gold per tonne) over 1.6 meters along strike from the adjacent La Constancia vein (a historical artisanal mine). Reported gold assay values yields for the other four anomalous areas ranged up to 39.03 g/t over 1.0 meters.

The Anorí Project consolidates the partners’ ownership of the mining concessions for more efficient capitalization and exploration. The partners consist of MGOL and its affiliate, Minatura International LLC (the “Majority Partners”), and several Colombian individuals and entities (the “Junior Partners”). The Junior Partners hold 14% ownership. The remaining 86% ownership will be allocated between the Majority Partners based on a third party evaluation of the relative values of the mining rights contributed by the Majority Partners (the “Evaluation”).

So now MGOL has 17,736 acres in Anori. Did the market know about that? of course not. It was in Minatura International LLC. they only knew about the 1500 acres.

Maybe the work they did shows that there is gold?

So let's pretend you are playing poker. Do you show people your cards? Why was AUY sniffing around anyway. Maybe they read SEC filings, and they talk to people and view the claims, and they saw MGOl and it's Anori claim.

Obviously MGOL could talk about the Anori project, because they had already gotten the land around the project that they were talking about.

Look at Ventana, who are exploring for gold in Colombia

That stock is 11, worth a billion dollars; a year and a half ago, it was pennies.

What are they working on? Check out there story, and you'll see. Then look at all the concessions MGOL has, and do the math.

OK so that's one project--and I'm not even giving any comparative data etc--what happens if you want to do that exercise 100X?

So throw in some acreage in Anori, and let the drill results eventually speak for itself.
Now, the market probably needs clarification on the concessions on Minatura International LLC and the vending in of those into MGOL, but too bad. That will take time.

That's the bet, and how much gold do they have.

And I think it will be a multi billion dollar company.

Wow. Thanks Palmoni. I have some shares of ATUS.F. Now I will add some MGOL.